Christians Can and Never Will Be Defeated 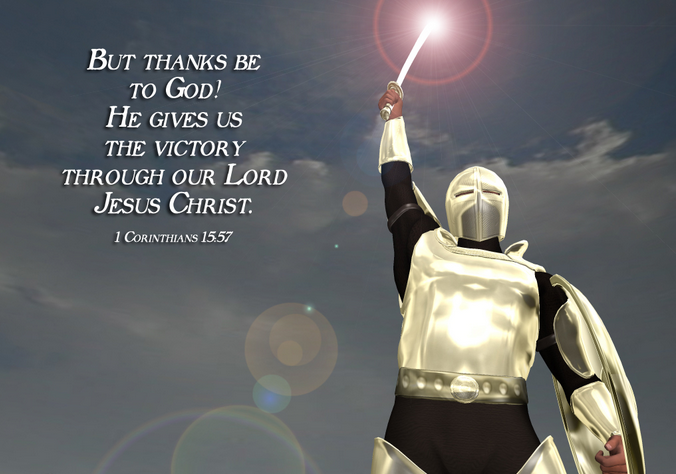 17 Therefore if any man be in Christ, he is a new creature: old things are passed away; behold, all things are become new.

Many Christians have become demoralized because of the media reporting on the rampage being perpetuated upon our history and way of life.

While it gives the appearance of an unstoppable juggernaut, in fact it’s nowhere near as dangerous as the media reports, primarily because it’s leveraging a limited number of actions and events that make it look like they are much stronger than they in reality are. In other words, they endlessly cover what they’re doing, giving the impression of strength and numbers they don’t have.

Even so, from the point of view of Christians who will bow their knee to none other than Jesus Christ, the victory has already been won, not only by the work of Christ on the cross, but also from the follow up work of the Holy Spirit, which by His indwelling in His people has separated them from the blindness imposed upon those that are lost in this world.

Separation from this world means it has no way of winning any type of battle or war it wages against us. This is the point of being a new creature, or more accurately, a new creation; we are no longer part of the old creation because old things have passed away and all things have become new.

When we don’t participate in their filth and perversion, it reduces their influence to close to nothing in us, which means we have already won the battle and war, even though they may continue to rage and posture against us.

Escaping the corruption of this world, its rulers and its elites, points to the fact that a new creation has been birthed, and it will spread and expand to be the dominant influence in this physical world over time.

They have tempted us with their filth and falsehoods, and because we’ve rejected it, we have displayed the victory of Christ in us to the rulers and their followers in this age. They don’t rage and riot because they are on the verge of victory, they rage and riot because they know they can never win against those that only bow their knee to Jesus Christ and the truth He is, and has revealed to us.

While Antonio Gramsci’s long march through the institutions is close to reaching its climax, those following his corrupt philosophy are outraged because it has visibly failed to bring about that which it had intended.

The reason for the rioting and destruction comes primarily from the reality that the kingdom of God on earth can never be defeated, and in fact will grow and expand to cover all the earth throughout this age.

Gramsci and others believed the long march would bring victory without the need to engage in war and violence. Again, the reason for the growing violence comes from the realization and discovery that the long march has failed, and is going to start reversing direction as the truth strikes back against the vile falsehoods that have had too much influence on too many people for far too long.

We aren’t going to win this victory by trying to take back the institutions degraded by these people, we win the victory by not allowing their influence to permeate or impact our lives or the lives of our children. We need to take the practical steps to build alternatives to all the institutions that have been corrupted. We win by replacing their vile influence on dying institutions with the truth as revealed in the Holy Scriptures, by applying the truth to new institutions and new creation communities.

And once we start building them, we need to put filters in place to ensure the parasites and corruptors aren’t allowed back into our tent.

The new creation civilization is one that can only be inhabited by those that have been born from above by the Spirit of God. They are able to be identified by knowing and adhering to the truth, and by walking in obedience to the laws and commands of God.

This corrupt world is to have limited influence on us because we are no longer part of it. We live in it but are not of it. The victory we walk in is we reject the evil and darkness in the children of the devil, and refuse to bow down before their sick and demented falsehoods.

Those who are willing to do so, have already won. Those that want to do the same but struggle within, can call upon God Almighty to empower them to walk in this victory that has already been handed to us by Him that has already overcome the world. Stronger brethren can also strengthen the hands of the weak.

Remember, we are born of incorruptible seed (1 Pet. 1:23). That seed cannot be destroyed or be overcome, and that seed lives within us.

This isn’t the beginning of our end in this generation or the generations to come, this is the beginning of the end of the long march through the institutions by our enemies, where they have failed to deceive and corrupt the elect of God and Jesus Christ.

Understand that the word world there isn’t a reference to planet earth, but to the age we live in. The earth is the Lord’s and the fullness thereof, and He gives it to the meek, not only in the age to come, but in this age, as He’s Lord of heaven and earth.

We need to walk in terms of that victory and promise, starting to build and replace the dead institutions filled with the disease and sin of Satan and his followers, providing alternatives that reveal the light of God in a dark world and age.

As children of light we are to walk in faith and obedience to God’s laws and commands, with God working and fighting alongside us until be mop up on the battlefield from the victory He has already achieved.

Those that refuse to obey the truth will find themselves at the mercy of enemies that show no mercy.