The new creation isn’t an a 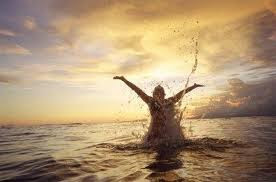 fter thought by God, it was and is His plan from before creation was initiated. This is why even with the greatness of Christ to bring us back into right judicial standing before God the Father by dying in our place, it’s only the doorway into a much fuller and comprehensive salvation that touches all areas of our lives – in this age.

When talking about the new creation, its essence is that it will be born from above; it won’t be of the earth. This is a reason New Jerusalem is referred to as coming down out of heaven. It was more than some future event as many believe Revelation 21 is talking about. It is obviously representative of the eternal purpose of God and the characteristics that come with the indwelling of the Spirit of God when we’re born from above or regenerated.

This is why we’re given a glimpse into what dwells within the city. The threads that started to be revealed from the beginning in the physical creation, continue on through the end of the Bible.

Within New Jerusalem are the throne, lamb, tree of life, light, gates that are guarded (evidenced by nothing being allowed in that God doesn’t approve of), among other things. These are all part of what was revealed in the first few chapters of Genesis, and shown to be consummated in Revelation.

In Genesis the throne was revealed in the sharing of dominion by God with man. Gates were revealed by God telling Adam he needed to guard the garden. The lamb was implied when God gave the skins of animals for clothes, which meant they had to be killed as a sacrifice for their sins. Light and the tree of life were mentioned specifically.

Outside of the lamb or sacrifice for sins, the rest were there before sin ever occurred, reinforcing the idea they were eternal and not temporal aspects within God’s plan for creating man.

If they had eaten of the tree of life and the spirit of God had entered in them before they ate the tree of the knowledge of good and evil, they would have been fruitful and multiplied, spreading the glory of God across the earth, being the image bearers of God they were created to be.

The point is, nothing of this purpose has changed, and we’re still called to do the same. The difference now is the wheat and tares will grow together, which means we’ll never have the culmination of God’s purpose in this age without the darkness at least dimming the light. But we will have a strong representation of that purpose everywhere on the planet.

Just because Jesus said the wheat and tares will grow together, it doesn’t mean they’ll be 50/50. I’m convinced that the kingdom of God will dominate the world, in the sense of it being the overwhelming way of life being lived on earth.

There will always be evil before the return of Jesus Christ to resurrect us, and it will grow in the sense that those that refuse to repent will increase in their way of life. Jesus says they will, and that means they will. What it doesn’t mean is that evil will fill the earth and the kingdom of God will be relegated to a few desperate outposts hanging on until he returns.

I believe the scriptures that tell us He will rule until He has put all enemies under His feet. He’s talking about the age we live in now, not some post-resurrection period. The scriptures listed above confirm there will still be dying, even though lives will be much longer as He extends our length of years.

That won’t happen after the resurrection, as we’ll be in our perfectly changed new immortal bodies. Death will at that time have been abolished.

The new creation civilization envisioned by God will be one that is started by the Spirit of God taking up residence in individuals, and grow as they respond in obedience to the Holy Scriptures, becoming increasingly conformed to the image of God by the work of the Holy Spirit within.

That in turn will lead to local expressions of God in His people, with an immeasurable reflection of who He is by His image bearers. It will permeate all areas of life as we learn how to apply the word of God to everything; that includes law, art, education, enetertainment, politics, the church, business, and everything else we find to put our hands to.