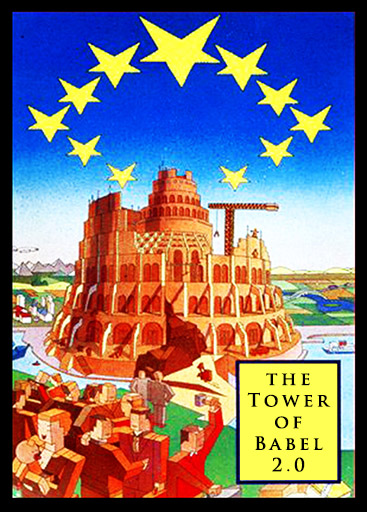 11 And the whole earth was of one language, and of one speech.

2 And it came to pass, as they journeyed from the east, that they found a plain in the land of Shinar; and they dwelt there.

3 And they said one to another, Go to, let us make brick, and burn them thoroughly. And they had brick for stone, and slime had they for morter.

4 And they said, Go to, let us build us a city and a tower, whose top may reach unto heaven; and let us make us a name, lest we be scattered abroad upon the face of the whole earth.

5 And the Lord came down to see the city and the tower, which the children of men builded.

6 And the Lord said, Behold, the people is one, and they have all one language; and this they begin to do: and now nothing will be restrained from them, which they have imagined to do.

7 Go to, let us go down, and there confound their language, that they may not understand one another’s speech.

8 So the Lord scattered them abroad from thence upon the face of all the earth: and they left off to build the city.

A lot of the insanity associated with the things the elites are trying to do in and with the EU only make sense when measuring it against what early man did when there was only one language and speech.

Before going on, I do want to mention that the words language and speech refer to not only having a single language, but the confession of the people on the earth at that time was also one. What that suggests is they were one in purpose and one in language.

With that understanding, let’s look closer at verse 4. Earlier in the history of man, God had commanded Adam and Eve to be fruitful and multiply, filling the earth. The people mentioned in the Babel story agreed as one to reject the command of God and make a name for themselves by building a city and tower in order to keep from being scattered across the earth, as the Lord had commanded. There is no doubt this was an act of rebellion against God.

God response to the rebellion was to confuse their language so they wouldn’t be able to communicate with one another. The smashing of the one language into many was accompanied by the creation of the many races now inhabiting the earth.

Notice in verse 6 how God calls attention to the fact the people are one, and that they also have one language. He separates the two in order to help us understand that the people were in oneness of purpose , along with being able to communicate that purpose and agreement without restraint because of having one language.

Being one and confession, purpose and language, by the very words of God, point to a powerful combination that He testifies would allow them to accomplish anything. The problem was they were walking in disobedience to God’s purpose for creating mankind, and God wouldn’t allow that to continue.

So He scattered the one language into many. The people, based upon the languages and races created as a result of God’s judgement, scattered across the earth in alignment with God’s purpose too.

The point in all of this as it relates to the EU is that man, once again, is trying to bring the world back to the oneness God judged. The primary weapon in our day is unrestrained immigration. Other recent attempts have included global warming or climate change.

What these elites are trying to do is find a point of contact that everyone can agree with, and turn the world into one that is centrally governed. They want to build the Tower of Babel once again, making man into their image.

Having failed with communism and socialism, they are now trying to use other means of uniting the world. This is the primary impetus behind the climate change strategy.

They think they’re clever by taking something that most people would agree to, like cleaner air and water, mix it with horror stories of water levels rising to the point of covering coastal cities because of fossil fuels, and blend them in their media narratives to the point most people can’t distinguish the difference between truth and reality.

The underlying impetus behind all of this is these people think they are special. They have a specific vision for the future of the human race, and it isn’t one that reflects the purpose of God for creating people.

We know a lot of their goals, including the push for abortion and euthanasia in the name of a distorted concept of human rights and freedom. They want an earth that is sparcely populated. A lot of people are an offense to them. To show the evil and demonic of this, they’re willing to push for and support the murder of the most vulnerable in society to achieve their ends.

So why the newer focus on multiculturalism and immigration? They bizarrely think if the world is browner, people will return to the oneness of ideas and culture, which would empower them to influence them to cooperate with their vision for the world.

This is why even in the marketing or advertising world you consistently see mixed race couples or people of color. The diabolical lie there is it appears it’s an attempt to be inclusive and provide opportunities for all people. Who could argue effectively against that? It would be difficult if it wasn’t for the obvious reason they’re doing it.

The reason the powers behind the EU and globalism support these types of efforts isn’t because they care about the third world, it’s because they see them as more pliable and open to their ideas because on a cultural and economic level, they have nowhere to go but up.

As usual, the central planning of the elites has proven once again to be a disaster. When the people migrate to developed countries, they not only aren’t adapting, but because of the overwhelming numbers, are transitioning large swaths of the countries they’ve moved into, into something reflective of the terrible conditions they left.

Trying to restore the Tower of Babel is the work of evil, delusional men. You would think after the deaths associated with Germany and the USSR trying to build gigantic, bureaucratic entities to control large areas of the world, and ultimately to rule the world, the elites would finally learn it’s not something they can do.

Whether they understand it or not, God won’t allow them to do it. He’s not going to allow mankind to gather the pieces of that which He scattered and make them into one. It’s why I see the EU as a failing idea that won’t last for long.

You can see from the rise of strong right political parties in Europe that are gaining in popularity and power. In two or maybe three election cycles, we could see the right take power and dismantle the abomination that the EU has become.

All the promises the elites make through their centralized governments will never be able to be fulfilled. That includes the U.S., where it has over $200 trillion in unfunded liabilities.

Eventually there will be a default, and once that happens, a terrific opportunity will lie before us to rebuild the world in the image of God as revealed in the Bible.

This will be a cause to rejoice. We need to prepare for it by living debt free, not being dependent on the government, educating our own children, and providing a plethora of private charities to provide for the legitimate needs of those that really do struggle to make it.

There are many other areas of life people will be looking for answer in. Hopefully this time Christians will be ready to give them. New Creation Civilization exists to provide some of those answers.