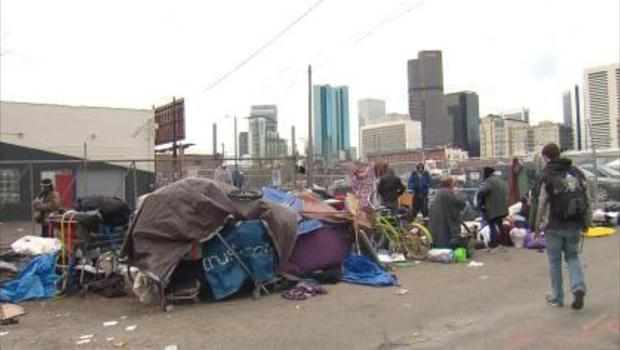 This is what Denver and America is slowly becoming

Actions by the Denver City Council in 2017 reinforced the filthy and barbarous actions of many so-called immigrants in the city, saying their purpose was to protect them from the “unintended consequences” of their illegal behavior.

What the corrupt and vile people on the Denver City Council did was unanimously vote to decriminalize things like defecating or urinating in public, removing the need to receive permission to camp on private or public land, lying on places like rights-of-way such as sidewalks, and panhandling, among other formerly illegal activities.

Democrat Mayor Michael Hancock and other cities officials said the new ordinances were put in place in order to protect legal and illegal immigrants from being fined or jailed as a result of their outrageous behavior.

Now the residents of Denver are being subjected to violations of their property and persons in order to placate these barbarians invading the country. That a civilization will allow itself to be degraded in this way is extraordinary. People of Denver should remove these officials from office and replace them with those that have their best interests at heart. Better, they should be charged with the crime of deliberately and systematically destroying them and their way of life.

In reality, what Denver did was protect the illegals from being deported because of breaking the law. Removing the laws associated with deportation allows them to break many of the norms of civilized society at the expense of the native population, without any fear of being sent back where they came from.

Think of it. People with little if any respect for people or property can now camp out on public or private property and defecate or urinate anywhere they want without being charged with a crime. This is why borders matter and we need to build the wall and send them back.

Or to put it another way, they are allowed to engage in uncivilized actions with little fear of being punished for it. This only encourages the bad behavior, resulting in people being exposed to their indecency.

It’s bad enough that these people have no interest in assimilating into America and what it stands for, they aren’t even expected by the liberals and Democrats to use a bathroom to relieve themselves. Not only is this abominable on personal level, it’s getting bad enough for it to be a major health hazard in cities that refuse to deal with the situation.

They’re not coming here for a better life, they’re coming to the West to get all the handouts from the government, which of course the taxpayers are subsidizing, while importing their uncivilized way of life upon the rest of us. Basically the U.S. government is using taxpayer dollars and debt to pay them to spread the types of unsanitary conditions that will increase diseases of real Americans.

Yet, people welcoming them in say we’re bigots for pointing out the reality and ultimate consequences we, our children, and grandchildren are faced with as America gradually transitions to a third-world country in the name of diversity and globalism.

Insights from the Bible

This has zero to do with treating strangers and sojourners well as they travel through the land, it has to do with uncivilized people using their fake status as refugees to steal the bread of the nation as they degrade it into the image of the same country they came from.

This isn’t Christian or Biblical, it’s a deliberate attack to remove the impact of Christianity on the West and replace it with a globalist vision by blurring and weakening the uniqueness and strength of America and other nations or peoples, so the elites can impose their vision of a world without nations; a demonic attempt to restore pre-Babel conditions to the world.

Jesus taught the disciples in the Great Commission that they and we are to go into all the world and preach the gospel, teaching the nations to do whatever He had commanded them. He didn’t teach us to invite other nations into one another’s territory as the means of spreading the gospel; that goes back to the wickedness of Babel.

Also, when the Queen of Sheba saw all the wonders of what Solomon built, he didn’t invite many of the inhabitants of that land into Israel so they could stay there and gaze at and admire it while depleting the nation’s resources, or worse, engaging in acts of violence against the Israelis.

As was always the purpose of Israel, and now real Christians, they were meant to be salt and light to the earth; an example and guide to the nations of how to live within their specific ethnicities and boundaries allotted them by God, as Acts 17:26 confirms.

That verse speaks to the actions of God against the first globalists that decided to reject God’s command to fill the earth and build nations. While the specific term ‘build nations’ wasn’t used in the beginning when God spoke this to Adam, I derive it from the overall focus of Genesis 10 and 11, where the nations are mentioned. See chapter 10 verse 32 to confirm the names listed in the chapter were a reference to nations, and the inescapable fact they were based upon families and their direct descendants in the mind of God. That’s what a biblical nation is, as defined by God.

When the globalist elites attempt to force the other nations into a geographic area that don’t share the same genetic history, culture and language, it will lead to not only strong tensions between people groups, but ultimately, to war.

Different races and/or ethnicities can live close together without violence if the number of those not of the nation are kept in relative low numbers. But when they overwhelm the native population and change the nature of the civilization they built, nothing good can come of it.

What value do Americans get out of many people that have no idea of what it is to be civilized defecating in public; in front of families that can’t hide from the actions if they want to get out in the world?

That and the accompanying disease that will inevitably break out, as typhus has already started to do, as well as those from third-world countries bearing diseases eradicated or controlled in America.

Think of it. Why are Americans required to get a number of shots to protect them from infectious diseases when traveling to various parts of the world? The question already answers itself. This is what we’re inviting into America.

It’s also why what was once America no longer exists within its boundaries. We now have pockets of America left. That’s where we need to consider looking to live in and start to rebuild the nation. It needs to be based primarily upon bible principles and law under the authority of the Lordship of Jesus Christ.

As for Denver and a number of other large urban areas, they are already collapsing from the immigrant invasion. For those areas caving into pressure from the globalists and elites, it’s going to get a lot worse before it gets better.

If you live in one of these cities or close by, it’s time to seriously think of moving out as quick as possible and finding the people you relate to and identify with.

As for the origins of nations and nationalism, it goes much further back that popular writers like Benedict Anderson assert in his book Imagined Communities: Reflections on the Origin and Spread of Nationalism. It goes back to the early days of the human race, following the destruction of the population on the earth in the days of Noah.