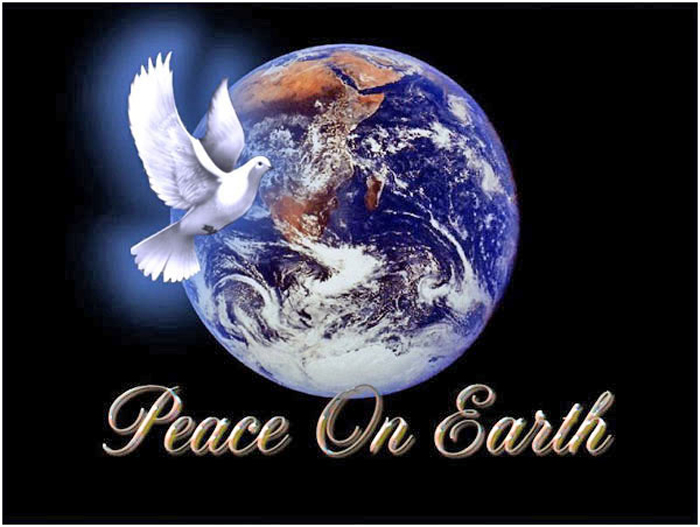 In a recent interview, Neil deGrasse Tyson asserted that exploration of space in the future could be a catalyst to produce peace on earth. In this article we’ll look at why that’s unlikely over the long term, but in the short term could be how it plays out.

According to Tyson, the reason he believes peace on earth could be the outcome of space exploration is because it would alleviate the perceived lack of resources on earth, which Tyson asserts is a major reason for past wars.

“The next 60 years, I think that the solar system can become our backyard. If that happens we can exploit resources that are otherwise rare on Earth but are plentiful in space.

“If space becomes our backyard, an entire reason for why we have had wars in the past goes away. So the exploration of space may be the greatest peace driver there ever was. That’s my hopeful thought.”

While I’m positive about the long-term outlook for the human race, as believers start to embrace the command by God to have dominion over earth, the reality is we still have something inherently wrong with us that has to be not only forgiven, but overcome in the future, as to its impact on the universe.

As we start learn and walk in obedience to the commands of God, we will have peace within, meaning alignment with the person and purpose of God, which then will be worked out with fear and trembling into the visible creation.

Until that happens in a mature way with numerous Christians, there is nothing that will change the world for the better in a meaningful and sustainable way. That isn’t to say there haven’t been a lot of improvements throughout history, but better medical care and increased financial prosperity falls short of what God has in mind for His creation. Both are important, but they’re not enough to satisfy God in relationship to His purpose.

Space exploration as a catalyst of peace

As for space exploration being a means of creating a more peaceful world, that is possible in the short term. The reason why is when big goals are announced and being worked toward, it temporarily removes the focus of people from the problems of the world, and their own problems, to a vision that is exhilarating and encouraging. When that happens, it has a positive psychological impact on the lives of people.

While that can in fact be an overall positive for peace between people and nations, over the long term I don’t see it being something that can last.

Even though Neil deGrasse Tyson believes what he describes as limited resources being a cause of war, according to the Bible it’s actually the war within us that potentially produces war if it is allowed to continue unabated.

I agree with him concerning the potential for peace, but see it coming from a different reason and direction.

After all, if improved technology and additional resources were all that was needed for peace, over the last 50 years or so we should have enjoyed a vast improvement in that regard, as technology has further improved the ability of companies, for example in the case of oil and gas, to extract much more from the ground at a lower price. That has happened in a number of other areas of life as well.

Inhabiting and developing another planet

Let’s just say there are breakthroughs and the will to travel to and populate Mars. At first the vision and conditions would require enormous cooperation between everyone to survive, let alone thrive.

But once the initial problems are solved, the same thing that causes mankind to misbehave on earth would remain within them. Eventually you would have your first murder and rape on planet Mars, just like you do now on Earth.

This is why big visions alone aren’t enough, including space exploration, to produce peace on earth, or anywhere else. We must start with the work of the Holy Spirit within, and from there work it out into creation. If that’s not the foundation of improvement and success, it won’t be much more than outward innovation that will eventually come crashing down because of the inherent dark nature of man.

That said, if it is something that is worked within to without, i.e., built upon the foundation and work of Jesus Christ, it not only will bring peace on earth, but peace across the universe if man is given the time to explore and inhabit the planets across the universe before Jesus ends His work in the current age.

After all, if exploration and discovery were the key to peace on earth, it would have certainly happened when the West discovered what is now America. At the time there were plenty of resources to be used, yet war was always just a step away. This is because of what is in man, that must be subdued.

Vision, including a vision of space exploration and spreading civilization across the universe, is important, and we vision to provide impetus to innovate and improve our lot in life.

But all success eventually must be built upon the foundation of a people that are being conformed to Christ in order for it to find stability and sustainability in a fallen world. This is why God’s people, the meek Christians, will inherit the earth. They are the only ones that can really manage the earth and possibly universe, in a way that is peaceful and will last.

By meek Christians I’m not talking about wimps or the fearful, I’m talking about meek toward God in the sense of learning and applying His laws and commands in all aspects of life. Meekness has nothing to do with fearful weakness, but a confidence that by submitting unto our Creator, Savior and Lord, we will be successful, in the long term, as to whatever God has planned for this age – for planet Earth, and the universe.

In the end, just like parents that may be wildly successful in generating a solid income and enjoying a nice home, cars, and other nice things in life, can fail miserably in raising their children or in their relationship to one another. They can have a strong vision that allows them to achieve success, but as Jesus taught, we or they can gain the whole world but lose our soul.

The point isn’t that one need choose between the two, but only that we are to do it in alignment with the word of God, and patiently work toward our goals in this life, based upon the guidance revealed in the Bible and worked into our lives.

We are not to have faith in visions or goals, but in the God of the universe who created us for His pleasure and purpose. If we remain grounded in that and live in accordance with His commandments, we will enjoy peace under any circumstances, and if God gives us time to do so, will spread Christian civilization across the universe, visibly revealing the will of God for this creation, unto His glory.