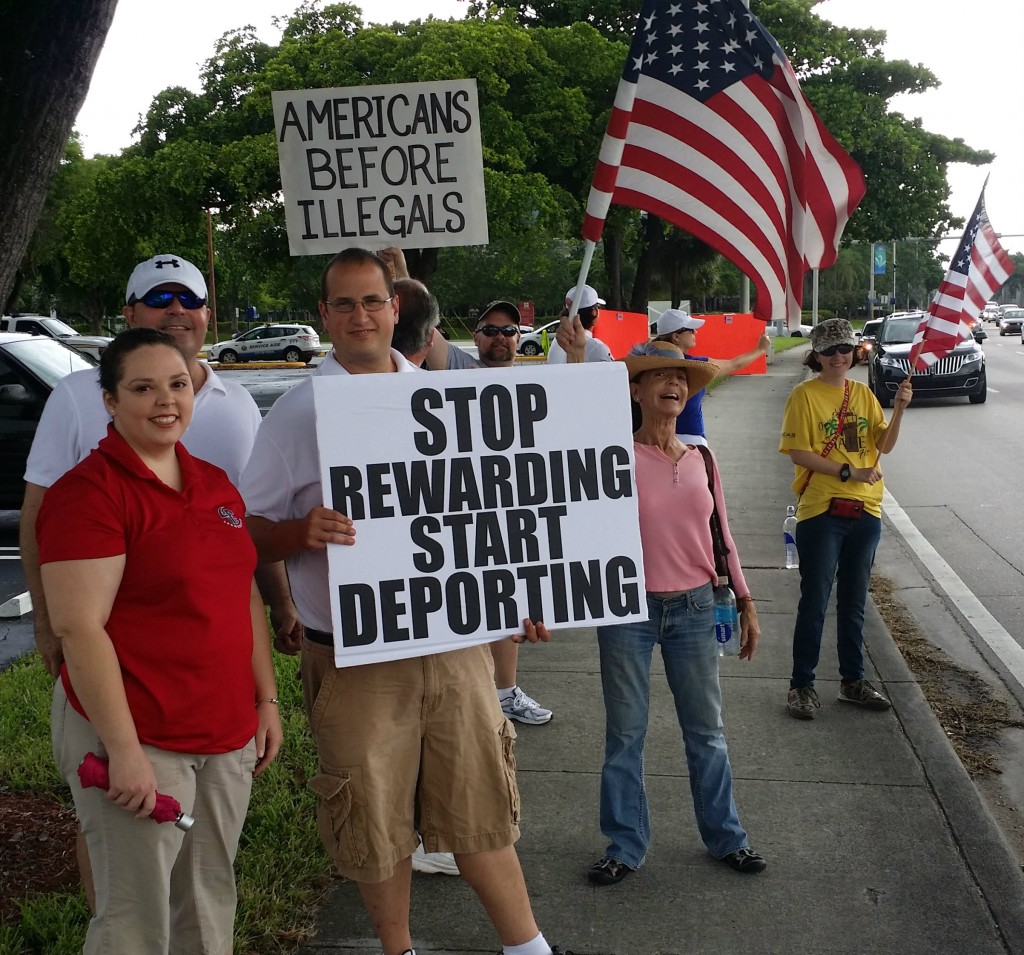 That the U.S. is under attack by immigrants can’t be denied, as the number of people flooding into the country is extraordinary, changing what America is. As a matter of fact, it’s no longer American by any definition or stretch of imagination as the founders envisioned it, conceived it, and were themselves, the foundation of.

A problem in identifying it as an invasion is that most people think in terms of armed invasion. Now obviousy no country in the world would be stupid enough to directly attack the U.S. and attempt to physically take over the country using troops and weaponry. It would be a suicide mission.

This is a stealth attack by a people that have little if any identification with America and what it once was, and what has made it great. And as they swarm into the country, once they gain citizenship the vast majority vote on an identity basis, not an ideological one. The issue is of course that Hispanics, overall, drift far more left than real Americans do.

With the majority of Hispanic illegals in particular gravitating toward socialism, it’s easy to see where this country is headed if the tide isn’t rapidly stemmed, and those illegally in the country aren’t sent home where they belong.

While it can be slowed down, the reality is most Americans don’t have the will to resist because they’re in part confused by the uncertainty of whether or not they’re being Christ-like in their outlook concerning illegals, with many guilt-manipulators using Bible verses like Leviticus 19:34, where it states this:

But the stranger that dwelleth with you shall be unto you as one born among you, and thou shalt love him as thyself; for ye were strangers in the land of Egypt: I am the Lord your God.

This sounds very liberal with a cursory glance, but the reality is when the Bible talks about love within this context, it’s referring to treating everyone the same under the laws God gave Israel. Love meant absolutely nothing else in this particular verse.

The problem and lie is many people have redefined love according to psycho-babble, and now is thought of as some time of good feeling we are to have toward others. Jesus stated in reference to loving Himself, that “if you love me, keep my commandments.” It had zero to do with feelings or emotions.

Concerning the law and strangers, Exodus 12:49 says this:

One law shall be for the native-born and for the stranger who dwells among you.

If a stranger committed a crime, they were required to undergo the same penalties the Israelites would incur.

And the next time someone tries to manipulate you by appealing to loving strangers in the modern emotional meaning of the word, rather than the Biblical meaning of treating them in light of the guidelines of God’s laws, remind them of the above verse:

Moreover of the children of the strangers that do sojourn among you, of them shall ye buy, and of their families that are with you, which they begat in your land: and they shall be your possession.

The Amplified version says the same verse this way:

Moreover, from the children of the strangers who live as aliens among you, from them you may buy slaves and from their families who are with you, whom they have produced in your land; they may become your possession.

If foreigners choose to or allowed to remain in a country, than they become stock to buy as slaves, according to the Scripture above. If guilt-manipulators use the word of God to support illegal immigration and invasion of America, they must also include the verse above which condones buying their children to work for the benefit of Americans. You can’t pick one verse without including the other.

Another important thing to do in regard to how God identified those in Israel and those not of Israel. Just do a Bible word search and include the word stranger in it. 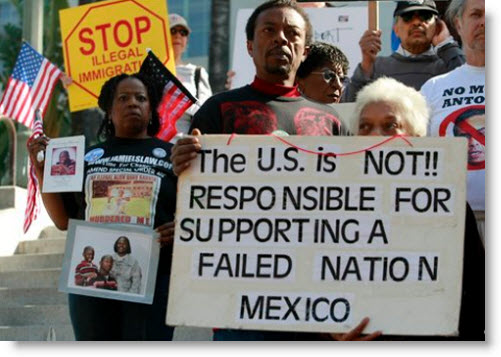 Every time it refers to this topic, there is a clear distinction between those who were Israel, and those that weren’t.

Treating those moving within the borders of Israel, based upon the law, was to be the same as true Israelis. This is what loving them as themselves meant. There wasn’t to be one set of laws for Israel and another for foreigners, sojourners, wanderers, or resident aliens, as they are called in different translations of the Bible.

The point is there was no special rights or circumstances where God expected Israel to treat them differently than they would themselves.

Why the above points matter as it relates to the current invasion of America, is these people, who have no interest in or part of shared American values, are coming in not only for the purpose of getting various forms of welfare, but more insidiously, are preparing to, once they get the numbers, to turn America into something that will no longer be recognizable to true Americans. They’ll do it through the ballot box.

This is why the ignorant Republicans that say it’s illegal immigration that is the problem, don’t get it at all. The issue isn’t illegal immigration, it’s mass migration into the country in order to eventually gain positions of power because of superior numbers that will be used during elections.

There is no doubt this the major purpose of the invasion.

As this headline rightly asserted: “Is Alexandria Ocasio-Cortez too “far left” for America? Absolutely not.”

Why not? The answer is, because America has been invaded by those that embrace who she is and what she stands for. The invaders, overall, are at best mild socialists, and worse, radical socialists that want to embed themselves as parasites into the capitalist system of the country, and use it to further their evil socialist agendas.

That a wacky anti-American could win so handily over her opponent, testifies to the fact the consequences of the invasion are starting to take root in the country.

Some people will object to the anti-American label I gave her and others like her, but the truth is, just because a person has citizenship doens’t mean they are an American. Just because they reside in the country, taking advantage of the perks, doesn’t mean their values align with real America.

There is nothing in the Bible that justifies an invasion of another country that results in the native population being overrun and their values thrown aside for the dark, and in this case, unbiblical values of others.

All that we’re told is if there are people doing business in the country or residing here, we aren’t to treat them any differently than ourselves. If they murder someone, they are to be punished for it. If they steal, they are to pay restitution, etc. There is no other obligation or requirement by God to embrace an invasion that would in the case of America, continue to turn it from a Christian nation into an abomination, as is already happening on the East and West coasts.

As for the partially fake separation from families crisis that has been manufactured by the media because of their hatred from Trump, it’s a side show meant to distract us from the implications of the invasion, and the consequences of what true Americans will have to face if the country is continually abandoned to the strangers and aliens that have come to the country in the millions.

By fake separation, I don’t mean there isn’t a small number of families where this has happened, what I mean is Obama and others had the same thing going on during their administrations, and they were, for the most part, ignored by the media. The focus of the maintream, fake media on it now is representative of more hypocrisy coming from them as a result of their hatred for President Trump.

For the reasons stated in this article, there is no Biblical requirement of Americans to be forced to accept these invaders, and we must get much tougher in the enforcement of our existing laws, and build the wall.

As for the idea they’re being mistreated, that’s a lie because the Biblical declaration is they are people residing in the country, not a bunch of invaders trying to illegally enter the country.

That isn’t to suggest they should be harmed or treated contrary to the laws of God, only that there is no reason Americans should bear the brunt of this non-military attack, by enduring murders, rapes and thefts from the worst of the lot, and paying millions in benefits to those that aren’t part of this country, and should be sent back to their homelands and make their own countries great again.

To show how bad it’s already gotten, McAllen, Texas Mayor Jim Darling keeps the American, Texas and Mexican flags in his official office. The idea of having a U.S. mayor keeping a foreign flag in his office, and not appearing to think there is anything wrong with that, shows how far down the rabbit hole we’ve already gone.