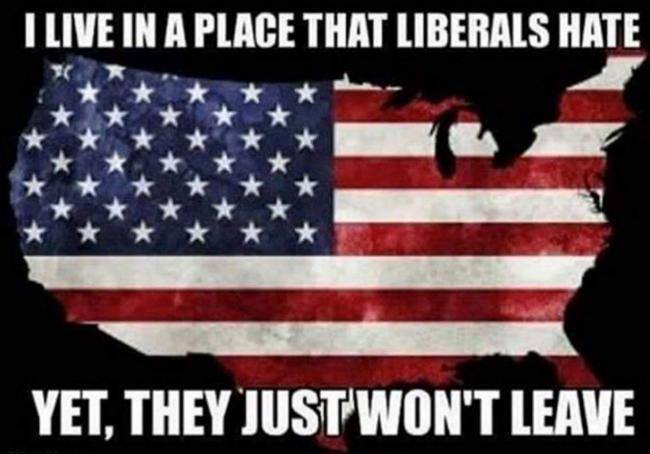 The first thing to understand about the current Democrats are they are no longer what they were in the recent past. The Party has been taken over by leftist, SJW radicals, and they have no desire or inclination to work or compromise in any way with their political and cultural rivals: the right.

Even though Hillary Clinton made the term ‘Deplorables’ a rallying cry for the right, the truth is she was only the tip of the spear for what the Democratic Party believes and has become.

It has been taken over by those that hate Western civilization, Christianity, and all those that adhere to the foundations that brought forth the greatest civilization in world history.

What is it that, at its core, drives these radicals and their hate? As with the response of Hillary Clinton to her loss to Donald Trump, they literally think they are the annointed ones, or in other words, that their way and manner of life is superior to those on the right that still remain part of Western civilization and real Christianity.

That isn’t to say everyone on the right are Christians, because they obviously aren’t. What it does mean is the fruit of Christianity as expressed through the individual lives of the believers and reflected in the laws and institutions of America and many European countries, they do believe in.

No compromise from the left

For those that remain puzzled as to the violent response of the left and Democrats, it’s primarily because of the aforementioned belief they are superior to the right and as a result, are meant to dominate us by forcing us to obey and live out our lives based upon their ideology and identity.

This is why they refuse to work across the aisle, as many of the foolish Republicans in America still try to do, as if they are reasonal human beings trying to make the country better by solving problems.

Angelo Codevilla said this about the logic driving their behavior and demands:

“The logic’s force comes not from the substance of the Progressives’ demands. If that were the case, acquiescing to or compromising with them could cut it short. Rather, it comes from that which moves, changes, and multiplies their demands without end. That is the Progressives’ affirmation of superior worth, to be pursued by exercising dominance: superior identity affirmed via the inferior’s humiliation. It is an inherently endless pursuit.”

In a nutshell, this accurately describes and defines why an endless stream of insanity is released from these radicals, as they have completely abandoned the foundations of Western civilization and the Christian values it was built upon, and consequently, not having any ideas and values of their own, have to grasp and things outside of reality in order to have an alternative to truth.

This is why in the area of gender, for example, an increasingly barrage of actions and thoughts are presented that are completely outside the reality that there are only two genders, and marriage can only be between a man and a woman. The fact they got authorities to legalize gay marriage, doesn’t make it real or legitimate; it’s nothing more than a parody of marriage between a real man and a woman.

We have to understand the reason behind their unwillingness to work together with those on the political right. After all, if they really believed they needed to change us, they would take steps to improve who we were. The problem for them there is if we were to improve, based upon their standards, it would mean they wouldn’t any longer be in a perceived superior position over the rest of us.

What they want instead is to totally defeat us by warring against us to the point of surrendering and waving the white flag to them. This is one of the major reasons you never apologize for what you believe or say when confronting their insanity and loss of any semblance of reality in regard to the world we live in.

The bottom line is the reason they hate us so much is because it makes their own sad and pathetic lives feel better. It makes them feel better about who they are. This is hate in its pure form. As Jesus said of Himself, they hated me without a cause. The religious leaders of His day and those they influenced felt they were better than the God who created them. They hated Him for exposing their hypocrisy and revealing they were evil.

As a result of their superiority complex and outright hate for our way of life and ideas, they refuse to accept anything else than our surrendering to their will and submit to their attempted dominance over us.

This is why when you hear the Democrats and liberals talking, they make no sense; they’re incoherent. They have no desire whatsoever to lower the hate level or stop the violent atmosphere they’ve created. They will keep pushing until someone breaks, so they can then use their mainstream, fake media allies, to spin it as if the right has become violent.

When the foundation of the law of a country or people is no longer adhered to, there is nothing left but to gravitate toward the people you feel safe with, and that’s why we’ve seen the fracturing of what was formerly America. It’s of course still America geographically, but what America has been even as short ago as the mid-1950s, no longer exists.

With the radical agenda of the new, radical Democratic Party, it no longer believes the laws of the nation apply to them, and have used the judicial arm to bypass the checks and balances that were put in place so this very thing wouldn’t happen.

The major mistake made by the radicals that have taken over the Democratic Party is they revealed their hand too soon. When they had Obama elected as president, they thought they has safely passed the demographic numbers needed to maintain their agenda by using the vote. When Trump beat Hillary, his victory literally burst that bubble to the point of triggering any semblance of hiding what they were after, and their willingness to engage in force if necessary, to defend what they perceived as their right to rule over us, whether we voted against it or not. This is why so much obstruction has been put in the way of President Trump.

They’ll lie, cheat and steal, and many times resort to violence in order to get their way. In the case of lying, that was most obvious from, Ford, the lying accuser of Kavanaugh, who pretended she couldn’t remember any of the details surrounding the alleged sexual assault. She obviously did that in order to keep from being charged with perjury in the matter.

College students on many campuses continue to threaten the physical safety of those on the right, and Republican politicians have been attacked and shot at, with mainstreain media showing little if any, outrage over the matters.

This is also, in my opinion, why the prop bombs sent to those on the left that vigorously opposed President Trump, were certainly a staged series of events in order to take the focus off the violence of those in the Democratic Party, and make it appear the right is engaging in similar tactics.

It’s important to understand these things because there is no bargaining, negotiating, or compromising with the left. They only give the impression they want to reach across the aisle when they are underrepresented in Congress or don’t have the White House. When they’re in charge, they immediately reveal their true agenda and attempt to bypass the checks and balances our forefathers put in place in order to keep them from imposing their will on the remainder of the population.

Even worse, now they are trying to govern and rule in the U.S. even when they lose the elections. Again, this is because they actually believe, because of the delusional idea they’re superior to the rest of us, that it is their right to do so.

While there will be some temporary defeats in the cultural wars, we need to remain faithful to God, live the truth, speak the truth, and share the truth with those whose lives we have an influence in.

Over time, we will be victorious in this war, and a new creation civilization will emerge out of the confusion and declare the glory of God in Jesus Christ as revealed in an obedient people.

We will have dominion over the earth; it’s time to put a down payment on it.