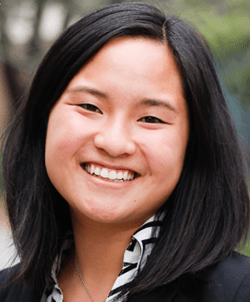 After abstaining from an alleged plan by the Department of Health and Human Services (HHS) to legally define a person’s sex as the biological sex they were born as, Isabella Chow, a Christian and member of the student Senate, was pressured to resign by the totalitarian Queer Alliance Resource Center, an on-campus advocacy group for homosexuals and transgenders.

So far over 1,000 people have signed a petition demanding that Chow step down for not supporting the insane narrative that the biological gender you’re born as has little to do with being a man or a woman.

On social media, the intolerant totalitarians called her a “mental imbecile” and a “horrible person.”

The group said clearly it will not “tolerate” her decision to abstain rather than approve of their resolution, calling her decision one of “hate.”

Normalizing acts of hate—even in the form of a pretty speech and a vote to abstain, and especially when it comes from an elected official whose role is to represent the whole of the UC Berkeley student body—will not be tolerated.

Part of the resolution she was expected to support stated this:

[T]he HHS’s proposed ‘definition’ is purposefully trans-exclusive, as it seeks to create an understanding of sex and gender that is fixed, determined by genitalia at birth, and limited to the binary (i.e. the options being either male or female).

Chow’s response to the resolution was this:

My God is one who assigns immeasurable value to and desires to love each and every human being. In God’s eyes and therefore my own, every one of you here today and in the LGBTQ+ community as a whole is significant, valid, wanted and loved—even if and when our views differ.

That said, I cannot vote for this bill without compromising my values and my community that elected me to represent them,” she continued. “As a Christian, I personally do believe that certain lifestyles and acts conflict with what is good, right and true. I believe that God created male and female at the beginning of time, and designed sex for marriage between one man and one woman.

For me, to love another person does not mean that I silently concur when, at the bottom of my heart, I do not believe that your choices are right or the best for you as an individual.”

The Daily Californian, a student newspaper, went on the attack against Chow as well, refusing to print her response to the false allegations. The leftist rag said the reason for not reporting her response was because it “reinforced” her speech, which “utilized rhetoric that is homophobic and transphobic by the Daily Cal’s standards.”

For readers, this is why you never talk to the media. They will never give anyone on the right or Christian an honest and open opportunity to tell their side of the story. And as shown above, they will outright lie without any qualms.

For Chow to say she can’t, because of her Christian beliefs, support the resolution, has nothing to do with being “homophobic and transphobic,” as the newspaper lied and stated as fact, when in reality the Bible clearly states both are an abomination in the eyes of God Almighty and Jesus Christ.

The University also allowed the outrageous harrassment to continue, as banners were placed around the campus calling for Chow to resign.

The San Francisco Chronicle quoted Chow as saying, “No matter how much I tried to say, ‘I can love you and still disagree with you,’ people still interpret my disagreement with being a bigot and a hater.”

This is why you never apologize for speaking or acting on the truth, and why there is no reason to attempt to reason with these wicked people. They demand for everyone agree with their sin, and if they don’t, they will slander and libel anyone with their usual labels in an attempt to shut down speech concerning these matters.

My question is this: why does any Christian or person on the right think the outcome for them will be any different than it has been for others that have faced the rage of the left? These deviant hate groups demand we accept what they think, say and do, or face their wrath.

As for this specific situation, the reason they’re responding so strongly is because if in fact the HHS does implement this, it would take away their ability to legally force those on the right from adherring to their mentally unstable and illusory definitions of what reality is in relationship to gender, and attempt to legally shut down opposition to their abhorrent lifestyles.