The bizarre left can’t surprise me anymore as to the things they sit around and think up in order to attack traditional terms and reality, and Berkeley hasn’t disappointed in that regard, as it recently found time to make up an ordinance that bans the use of terms that refer to men, and words like “he” and “she,” which are now to be referred to as “they.”

Now words like “manhole” and “manmade” will have to be described as “maintenance holes” and “artificial.” In the case of the latter, it doesn’t even make sense beyond the obvious ignorance of the change. Since when is something manmade associated with artificial? Artificial in comparison to what? And these people consider themselves intelligent as measured against many of their American counterparts.

Worse, now even the words “men and women” are to be replaced by “people.”

These people are of their father the devil. They’re satanists attempting to overturn the original revelation of the Bible that God created man in His image, and that image was represented as male and female.

A lot of people haven’t figured this out yet, but the attack on gender is a direct attack on the very image of God. 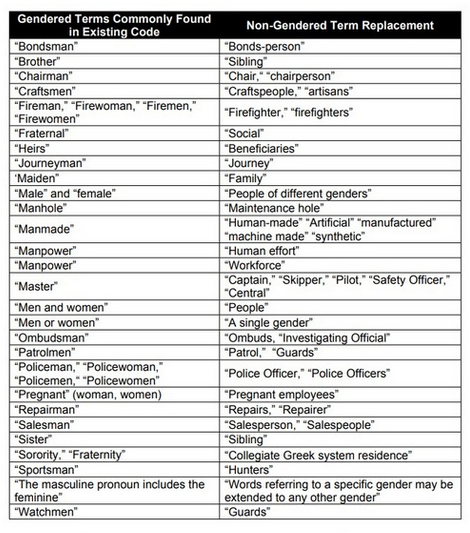 Leading this freak show as the primary author of the bill is Berkeley City Council member Rigel Robinson, who obviously has far too much time on his hands. He said:

“Having a male-centric municipal code is inaccurate and not reflective of our reality. Women and non-binary individuals are just as entitled to accurate representation. Our laws are for everyone, and our municipal code should reflect that.”

Yet he removes the representation of men and women, and replaces it with words that represent nothing but the fantasy world surrounding non-binary genders, which is a spiritual and mental illness.

Never give in to even these attacks on Christianity and reality. Never succumb to these outrageous laws that force us to redefine reality by changing the words we use to define it. Words have meaning.