Thoughts on Tolkien’s ‘The Fall of Gondolin’ 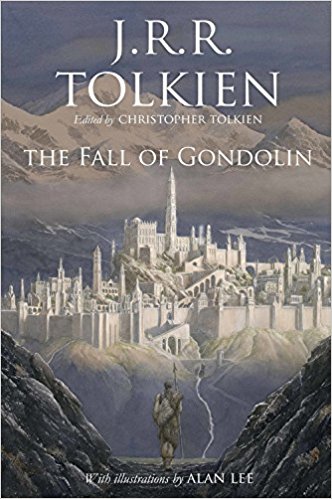 While I haven’t read Tolkien’s ‘The Fall of Gondolin’ yet, because as of this writing it hasn’t been released, the description given by the editor does provide some insight into what to expect, and is worth taking a deep dive into.

First, I do want to say that this book excites me more than any other book released after The Hobbit and The Lord of the Rings, primarily because it focuses on the elves, which while important in other Tolkien tales, don’t receive the star treatment I have been looking for for a long time.

So to have a story with the elves as the lead characters, rather than ancillary characters to another storyline, is very compelling to me. I look forward to buying and reading the book, which is scheduled to be released on August 30, 2018.

The story is authored by J.R.R. Tolkien, with his son Christopher Tolkien being the editor, and Alan Lee the illustrator.

Here’s an excerpt from the description of the story:

“Central to this enmity of the gods is the city of Gondolin, beautiful but undiscoverable. It was built and peopled by Noldorin Elves who, when they dwelt in Valinor, the land of the gods, rebelled against their rule and fled to Middle-earth. Turgon King of Gondolin is hated and feared above all his enemies by Morgoth, who seeks in vain to discover the marvellously hidden city, while the gods in Valinor in heated debate largely refuse to intervene in support of Ulmo’s desires and designs.

“Into this world comes Tuor, cousin of Túrin, the instrument of Ulmo’s designs. Guided unseen by him Tuor sets out from the land of his birth on the fearful journey to Gondolin, and in one of the most arresting moments in the history of Middle-earth the sea-god himself appears to him, rising out of the ocean in the midst of a storm. In Gondolin he becomes great; he is wedded to Idril, Turgon’s daughter, and their son is Eärendel, whose birth and profound importance in days to come is foreseen by Ulmo.”

It appears that the story is of the forces behind the support and opposition of Gondolin, with Tuor, cousin of Túrin, being the main character. (Fans of the story know who these people are.) It is setting the stage for the future that is alluded to and talked about some in The Lord of the Rings and The Hobbit.

One important tidbit I noticed in the description of the story should be taken as a clue in regard to this story not apparently having much in the way of battle scenes in them.

I draw that conclusion from this:

“After a minutely observed account of the fall of Gondolin, the tale ends with the escape of Túrin and Idril, with the child Eärendel, looking back from a cleft in the mountains as they flee southward, at the blazing wreckage of their city.”

So readers will seemingly have to manage expectations in regard to looking forward to some amazing descriptions of the battle between the elves and their attackers. To me, that’s unfortunate, as Tolkien’s work has portrayed honor, bravery and sacrifice from the characters when encountering war and enemies. It provides a great backdrop to present the strengths of the characters when under pressure and battling against evil.

Based upon the preview, I take it that there won’t be too much talked about concerning the attack on the city of Gondolin. That said, the idea of presenting the elements that result in the battle could be just as attractive as a story. It will lose something in my view with the lack of a prolonged battle scene, but it could be made up for by the forces that are at work leading up to it.

Out of all the books that are part of The Hobbit and The Lord or the Rings world, this is the one that has interested me the most, outside of the two major works mentioned above.

The book can be pre-ordered now, or ordered after the release date if you’re reading this after it is released.

Shares
|ShareTweet
Leave a comment book review, fantasy, tale of the fall of gondolin, the hobbit, the lord of the rings, tolkien