This is Why God Shakes Everything in Earth and Heaven 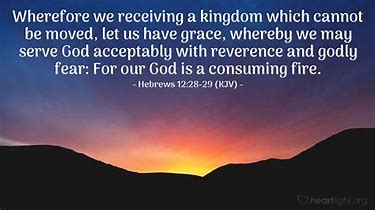 29 For our God is a consuming fire.

In light of the current challenges that have come about from the coronavirus pandemic and the accompanying responses to it by various governments, it’s edifying to take into account that the Bible has revealed these types of events long ago, helping us understand what it is He’s doing in the larger picture of His purpose.

This won’t be the last time we all face difficult times that will change the world as we knew it before the events unfolded, so it’s important to comprehend what is it God is moving toward when shaking the heaven and the earth.

In Hebrews 12:26 it states that, “Yet once more I shake not the earth only, but also heaven.” In verse 27 it defines what the phrase “yet once more” refers to.

The end game is that He is working in time toward the removing of all things that He made that can be shaken, in order that those things that can’t be shaken remain. He’s doing this in this age.

This should cause Christians great joy and increase our faith and hope for the future of our children and grandchildren, along with those that come long after, as it points to a process of an ongoing shaking throughout this age in order to bring the eternal purpose of God into being on the earth, which is that everything is to be conformed to the image of Jesus Christ (Romans 8:29).

This touches on all areas of life, including the way economies and businesses are to be run, which has been a major concern for a long time. Over the last twenty years there has been the dot com bubble, housing crisis, and now the crushing of the economy because of the decision to shut most things down in order to allegedly limit the spread of COVID-19.

Among many other things, it’s apparent that God is working on removing the factors that have allowed the global and national economies of the world to be extremely fragile; that’s why when these things are shaken there is always economic catastrophes that accompany them.

In the current situation associated with the pandemic, it’s touching more segments of life than I have seen in my lifetime, outside of wars. It’s also more encompassing than even the World Wars of the 20th century, where many countries weren’t directly involved; every nation is struggling with coronavirus, and it’s having an impact on everything associated with the everyday lives of people and businesses.

The bottom line is those of us longing for the people of God to fulfill His purpose on the earth, should be encouraged by what we see, although not rejoicing over the loss of life and carnage accompanying the virus and its extraordinary effects.

Something many of us should do is closely watch and record the many changes that come in the aftermath of the response to the virus, as we, and future generations, will need to have understanding and wisdom concerning much of what it is God did to move toward His purpose for His people and planet earth. That way we cooperate with Him in His work and purpose.

One thing I know, according the the Scriptures in Hebrew 12, this will end up being for the glory of God and furtherance of His kingdom on earth.

Among the things to look for long-term changes and improvement are governance, family, intergenerational interaction among family and extended family members, work and business, and public school versus alternative education, among numerous other things.

Since almost nothing is unscathed in this shaking, I see this as the wisdom of God shaking many things in a way it can’t be understood or dealt with by those in think tanks, and other intellectuals, that in the past at least, were able to attempt to figure things out in a way that allowed for maintaining business as usual, or at least giving the impression of that being the case. In my view that happened in the housing and banking crisis about a dozen years ago, which afterwards appeared to return to normality.

I don’t think it’s possible to do so this time around because of the various segments of society and civilization that have been touched by this crisis. For that reason we won’t be returning to what is perceived to be normal in the years ahead. There are too many variables involved in the pandemic to allow everything to turn back to where it was before. I’m not only referring to how people viewed life, for example, after the Great Depression, but am talking about structural and practical adaptations that will change the way we live life.

Some of those would include the medical field, public schools, and probably the way many people think of the church.

No matter how it plays out, Christians should retain their faith and hope in Jesus Christ, knowing that this shaking, as with all shakings, is moving toward the completion of His purpose for His people, earth, and all of creation.