The Key to Building the Kingdom of God on Earth 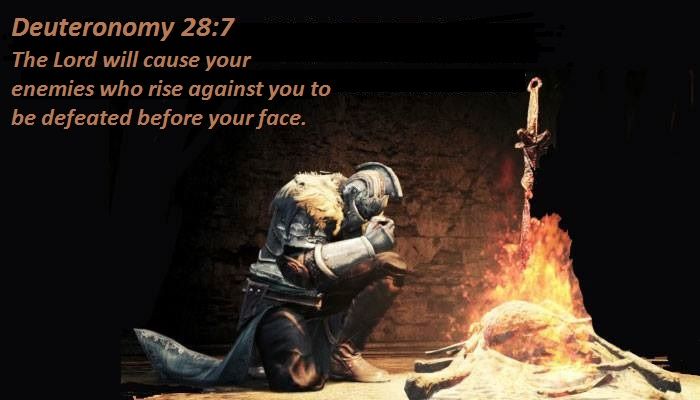 The kingdom of God on earth, or Christian civilization, will only be accomplished by the obedience of God’s people to His commands.

Many people like to quote and extract from the blessings of Deuteronomy 28, forgetting to read the first sentence, and the second part which lists the consequences of disobedience.

For example, the chapter starts with this:

I left it off there because the full list of blessings follow. I wanted to focus on one of them in this article, because it’s one of the most quoted scriptures in the chapter that I’ve heard.

Verse 7 says: “The Lord will cause your enemies who rise against you to be defeated before you. They shall come out against you one way and flee before you seven ways.”

Most believers get excited about this, and rightly so, but many times end up very disappointed because what happens in their lives and the lives of their family, friends and Christian brothers and sisters, appear to contradict the promise

Usually, although not always, the issue goes back to obedience. The one major exception in the Bible record is Job. He’s an outlier in order to teach us something, not to contradict the promises of God for those walking in obedience.

Others I’ve seen talk about power over the enemy, yet, a lot of those people that teach those things, again, leave out the obedience part, as well as faith in God; the two go together.

The idea of taking authority over evil spirits or having a strong influence in someone’s life, without first walking the walk in obedience to the commands of Jesus Christ from Genesis to Revelation, is a deception, even if it appears there are some temporary results that appear to be victorious.

As Jesus talk His disciples and others listening to them, they should do what the religious leaders of that day taught them, but they were ordered to not do the things they did.

Also remember, the people were astonished because Jesus taught as one having authority, not as one of the scribes or Pharisees. The reason was because a hypocritical life, even if the hypocrit is teaching some truth, is without power and influence.

The enemies we fight are the world, the flesh, and the devil. If we want to have power over them, we must learn God’s commands, embrace them, and walk in obedience to them.

For our enemies to come directly against us and flee seven ways, or in perfect defeat, obedience had to be a key element in the process of victory.

I believe this is part of what Jesus taught about the demons that were cast out of the two men. To stay where they were at in their lives was to invite them back into themselves, with the end result being much worse than the original.

This is why the one man that wanted to come with Jesus received instruction to go tell the people about the good things the Lord did for him. What that did was fill him with purpose as he went about the work of the kingdom. The other man, I have no doubt, was once again possessed by demons, and his condition was much worse than when Jesus had found him.

That’s why one account has only one of the men and the other two. The account with the one man showed the work of successful results of the demons being cast out and the proper response of the man. The other account let us know there were two of them, and the one apparently had no response to the deliverance.

The point is the one man sought Christ out afterwards and wanted to be part of what He was doing. The other seems to have been indifferent, based upon nothing else being said about him. Obeying what Jesus told the one saved him from the demons returning and entering into him again. This gave him power over them; the power or authority was a direct result of obedience.

There will be an expression of Jesus Christ on the earth, by which I mean His people walking in alignment with the image of God that we were created with. That includes His character, His holiness, and His dominion. Those are to come down out of heaven and be visibly seen on the earth in His people.

The scriptures teach us that the creation itself eagerly waits for the manifestation or revealing of the sons of God. That’s another way of saying God’s people will grow into the image bearers of God they were created to be, or, we’ll be conformed to His image, which was the eternal purpose of God from before time.

As that conformity to Christ increases over time, we’ll start to apply that change to all the areas of life we are part of, and that will bring about the kingdom of God on earth, or Christian civilization. The primary focus by most of us will be locally.

There will be some that have influence beyond one locality, but the kingdom of God and Christian civilization will be built one person, family, and neighborhood at a time. The work won’t get done until we walk in obedience to the commands of God and start to put the earth under new management.