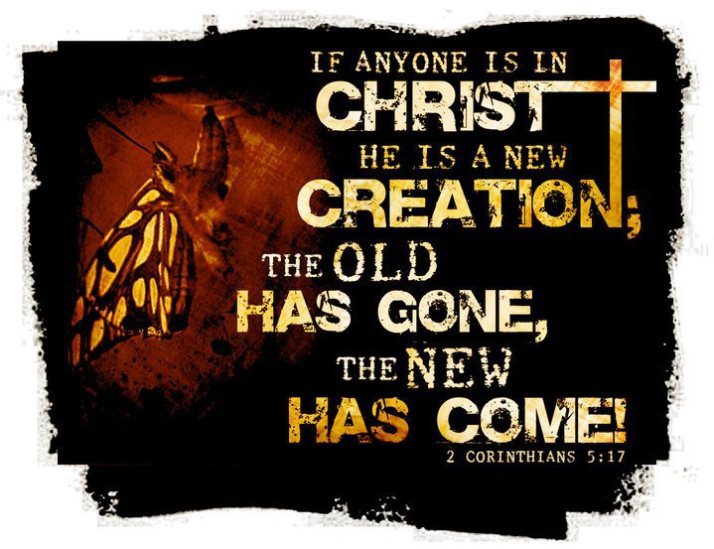 I don’t think most Christians understand what it means in the Scriptures that we are a new creation. Not only that, but the fact the new creation goes beyond the individual to the corporate New Jerusalem.

The basic difference is when we’re identified as new creatures it is a reference to the individual Christian, and when New Jerusalem is mentioned, it refers to all the people of God – past, present and future combined.

What I want to focus on is what this means in the present age. After all, we’re told in Hebrews 12:22 that we “…are come unto mount Sion, and unto the city of the living God, the heavenly Jerusalem, and to an innumerable company of angels,…”

New Jerusalem isn’t only something that awaits us in the future, it was a reality the moment the church was born on Pentecost. It of course will grow and reach its full measure over time according to God’s purpose in this age, but it has already come down from heaven and is represented in His people.

At the end of the book of Revelation is simply reveals to us what is entailed in the city and the growth of its impact it’ll have in this age.

New Jerusalem coming down out of heaven is the new creation conforming God’s people into the image of Jesus Christ, and the river of God, meaning the Holy Spirit, taking that and spreading it around the world by His work in His people. That’s what the river flowing out of the city represents.

The Lamb of God sits in the center of the throne. His eternal purpose is nothing less than His people bearing His image by having His character and holiness worked into them, and also having and taking dominion over the planet as we’ve been commanded to. In its essence, that is the kingdom and will of God we’re told to pray for by Jesus.

This is part of what it meant when Jesus said to Pilate that His kingdom wasn’t of this world. He had no interest in His servants fighting to take over the dying world that has the imprint of Satan on it, His interest is in creating an entire new world that is built and based upon righteousness.

When saying creating here, I’m referring to birthing an entire new creation. The old creation was spoken into existence, the new creation is birthed by God Himself in Christ via the Holy Spirit, who takes up residence in people that have faith in Jesus Christ and His work on the cross and resurrection.

To be born again, as John says, really means more fully, being born from above. This is what the new creation and New Jerusalem are all about.

Consequently, it’s not the job of Christians to put band aides on the old world. Our job is to cooperate and work with God in replacing it.

I’m not suggesting we aren’t be salt to the dying world. I’m saying that’s not the purpose of the kingdom of God. The purpose, again, is to replace a world that has already been judged by God with a new world based upon the very person of Christ in His people.

As 1 John 2:8 says, “… the darkness is past, and the true light now shineth.” The word ‘past’ in the verse means passing. Even back in the days of the early church John by the Holy Spirit revealed that the darkness was already passing.

1 Jn. 2:29 gives us another glimpse into that: “If ye know that he is righteous, ye know that every one that doeth righteousness is born of him.”

The darkness passing meant that the righteous works accompanying those that are born of God was already starting to shine in the world. That light and works of righteousness are fruits of the new creation.

This was what Heb. 11:10 talks about when we are told Abraham “…looked for a city which hath foundations, whose builder and maker is God.” The new creation and New Jerusalem are that city.

Jesus confirmed this in John 8:23, saying, “And he said unto them, Ye are from beneath; I am from above: ye are of this world; I am not of this world.” His being from above and not of this world points to the coming new creation, represented at that time solely in Him. That’s also why He told them it was better for their sake that He go away; He was soon to birth Himself in all of them and those that believed on Him through their words and testimony.

Understand when I’m talking world I’m not talking about planet earth, I’m talking about this age that has been permeated with the persona of Satan to the point of being unfixable. That’s why God crucified it in Christ and raised Him up as the firstborn of many brethren.

On the practical side, the point is we will find ourselves extremely frustrated if we spend our lives trying to improve things or people that are dying. Think of yourself or the people you’ve known that were so controlled by the impulses of sin, but once we or they were born from above, we started to really change.

Remember 2 Cor. 5:17: “Therefore if any man be in Christ, he is a new creature: old things are passed away; behold, all things are become new.”

The word creature in the verse means creation. We are a new creation if we’re in Christ. The old things mentioned are the old creation; that is passing away and all things are becoming new because of the work of the Holy Spirit now dwelling within us.

Again, I’m not saying we shouldn’t be salt and light to the world, only that meaningful and lasting change only come from the new creation.

If we start to think in terms of replacement rather than fixing or taking over, it’ll change everything we’re attempting to do in this world on behalf of Jesus Christ. That is why so many people burn out when accepting the worn out idea of wanting to change the world for the better; you can’t change a corpse, it has to be resurrected by a new birth from above.

Jesus had no interest in being Lord and King of a poisoned world, so He decided He’d birth a new one. That’s what all of us are part of, and what it means to pray for His kingdom to come and will be done on earth as it is in heaven.

The power of the Gospel is what brings all of that into being when people have faith in Jesus Christ.