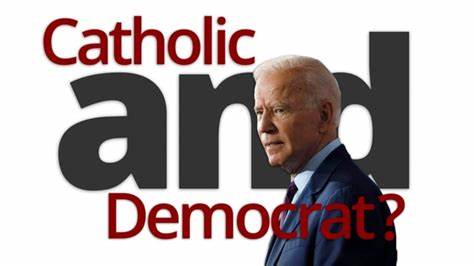 Catholic Democrats demand ongoing access to communion while continuing their support of baby murder. If the attempted intrusion by statist Democrats into the affairs of the Catholic Church isn’t a violation of the separation of church and state (based upon their assertions), than no such thing exists.

This is a time when Catholic leadership could shine by adhering to the tenets of their faith. Not only should they stick to their guns with Biden, but do the same with all the Catholic politicians that support the murder of babies.

The Democrats said this:

“The Sacrament of Holy Communion is central to the life of practicing Catholics, and the weaponization of the Eucharist to Democratic lawmakers for their support of a woman’s safe and legal access to abortion is contradictory.”

The fact is, access to communion is a privilege, not a right; it’s predicated upon a Christian walking in consistent obedience to the laws and commands of God. The flaunting rejection of the laws of God is in fact a reason to disallow access to the table of the Lord.

It would be a tremendous boost to Christianity in general to see Catholic leaders enforce the rules they’ve had in place for centuries. To not do so, in my opinion, will essentially turn Catholicism into nothing more than a barking dog with no bite, nor the teeth to enforce them.

They’ll start to be mockingly trampled under the feet of men if they don’t take a stand now.

This is an extraordinary opportunity that has been handed to Catholic leaders. The world awaits their answer.