The Conditions of Friendship According to Jesus 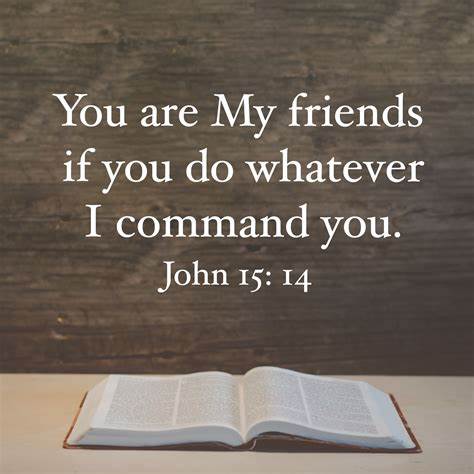 12 This is my commandment, That ye love one another, as I have loved you.

13 Greater love hath no man than this, that a man lay down his life for his friends.

14 Ye are my friends, if ye do whatsoever I command you.

15 Henceforth I call you not servants; for the servant knoweth not what his lord doeth: but I have called you friends; for all things that I have heard of my Father I have made known unto you.

I’ve once again been seeing a number of people professing to be Christians, slam the idea of walking in obedience to Jesus Christ, rather suggesting Christianity is all about a relationship with Him.

While that may sounds all good, we still must check everything out against the scriptures in order to comprehend and understand first, whether something is true or not, and second, what does it actually mean.

In this article we’ll look specifically at what Jesus revealed concerning friendship with people from His standpoint. He clearly states who He considers His friends, and if they are His friends, what He offers them in return.

How Jesus defines friendship with Him

What Jesus is doing in the Scriptures above is laying out the framework of what friendship is. As verse 14 above states: “Ye are my friends, if ye do whatsoever I command you.” This is very clear and unambiguous.

If we want to be considered friends of Jesus, the only way that is true is if we walk in obedience to the laws and commands of Jesus. There is no other type of friendship acknowledged by the Lord, as it related to people toward Him.

No amount of emotions or imaginary scenarios make Him your friend if you aren’t obeying Him. This doesn’t mean you aren’t friends from Jesus’ point of view if we happen to fall into sin temporarily. It means that as a way of life, for the duration of our lives, we are to search out the laws and commands of God as revealed in the Bible, and strive, with the help of the Holy Spirit, to obey them.

Secondarily, there is also the expected obedience in regard to our specific callings. We should pursue excellence in whatever we put our hands to, and discharge that duty once we enter into that calling.

Those things, very quickly, are how Jesus defines whether or not we’re His friends. Obedience is the bottom line.

What Jesus promises His obedient friends

In verse 15, Jesus reveals what He offers His friends:

“Henceforth I call you not servants; for the servant knoweth not what his lord doeth: but I have called you friends; for all things that I have heard of my Father I have made known unto you.”

In response to our obedience, Jesus says that everything He heard of the Father He will make know unto us.

Now obviously He was specifically confirming this to His disciples, but it’s just as obviously a promise to all of those walking in obedience to Him. While He spoke it directly to them while He walked the earth, He reveals it to us in the Holy Scriptures, with the Holy Spirit helping us to understand His words.

It may be surprising to some, but the more we study, understand, and walk in obedience to God’s laws and commands, the more understanding we are given of what the Jesus received of the Father for the purpose of communicating it to us.

That’s what Jesus gives His friends that obey Him.

Jesus’ expectations of us loving one another

Finally, in verse 12, Jesus lays out what He expects of believers in their behavior toward one another:

“This is my commandment, That ye love one another, as I have loved you.”

This is also very clear. To love one another as Jesus loved us, we are to treat one another in accordance to the revealed laws of God. What that means is that fulfilling, or treating one another in alignment with the law revealed in the Bible, is what love is.

The definition of Biblical love is to do no ill toward our neighbor, which again, is fulfilling the law is.

One quick word here. Some Christians actually separate the connection between love and the law, and suggest having nice emotions toward someone is what love means there. In other words, fulfilling the law is reduced to feeling good toward someone.

But this is far from the truth. As Ephesians 4:26 says, “be ye angry and sin not.” You can have angry emotions toward someone and not sin. How? By not allowing the anger to get the best of you and break God’s laws in some way against another individual.

Friendship toward Jesus is acceptable to Him if we obey His laws and commands. In turn, He helps give us understanding of what the Father revealed to Him via the Holy Scriptures, with the aid of the Spirit of God.

When studying, obeying, and contemplating on the laws of God, I have found the Bible open up in ways that are far more cohesive than I thought when younger, which I believe is a fulfillment of the promise of Jesus that He will reveal to those who obey Him what the Father gave to Him.