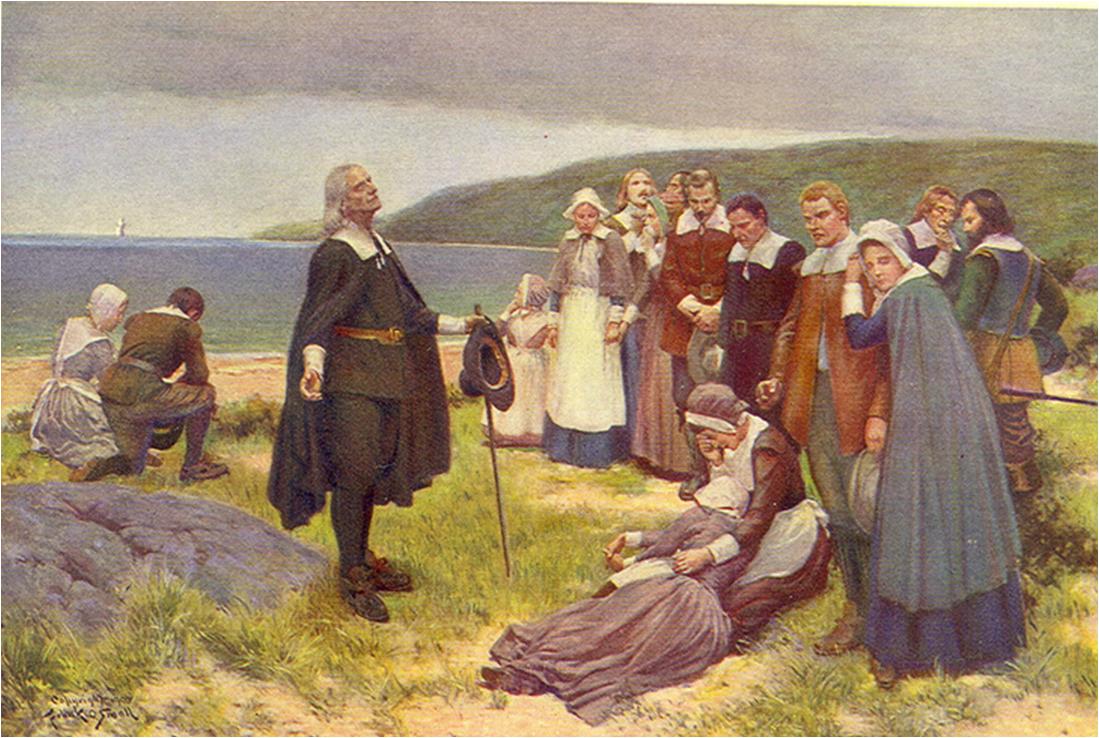 I occasionally like to read through the 6th-grade level of the McGuffey Readers because it has a lot of interesting snippets about famous or influential people from around the world in different times of history.

A few months ago I came across one from Lyman Beecher, where it included a portion of a sermon he preached in December, 1827, called ‘The Memory of Our Fathers.’

Incredibly, he talked about the attempt to degrade the men in a way we here about this day. He saw that the denigration of our founding fathers, if believed, could ultimately destroy the nation.

He specifically refers to either their direct faith in God, or at least being heavily influenced by the Bible.

Beecher is going back to the early days of the nation, not only referring to the men that were around in 1776.

Below are a few paragraphs of what he spoke:

The Memory of Our Fathers

We are called upon to cherish with high veneration and grateful recollections, the memory of our fathers. Both the ties of nature and the dictates of policy demand this. And surely no nation had ever less occasion to be ashamed of its ancestry, or more occasion for gratulation in that respect; for while most nations trace their origin to barbarians, the foundations of our nation were laid by civilized men, by Christians. Many of them were men of distinguished families, of powerful talents, of great learning and of preeminent wisdom, of decision of character, and of most inflexible integrity. And yet not unfrequently they have been treated as if they had no virtues; while their sins and follies have been sedulously immortalized in satirical anecdote.

The influence of such treatment of our fathers is too manifest. It creates and lets loose upon their institutions, the vandal spirit of innovation and overthrow; for after the memory of our fathers shall have been rendered contemptible, who will appreciate and sustain their institutions? “The memory of our fathers” should be the watchword of liberty throughout the land; for, imperfect as they were, the world before had not seen their like, nor will it soon, we fear, behold their like again. Such models of moral excellence, such apostles of civil and religious liberty, such shades of the illustrious dead looking down upon their descendants with approbation or reproof, according as they follow or depart from the good way, constitute a censorship inferior only to the eye of God; and to ridicule them is national suicide.

The doctrines of our fathers have been represented as gloomy, superstitious, severe, irrational, and of a licentious tendency. But when other systems shall have produced a piety as devoted, a morality as pure, a patriotism as disinterested, and a state of society as happy, as have prevailed where their doctrines have been most prevalent, it may be in season to seed an answer to this objection….

…The persecutions instituted by our fathers have been the occasion of ceaseless obloquy upon their fair fame. And truly, it was a fault of no ordinary magnitude, that sometimes they did persecute. But let him whose ancestors were not ten times more guilty, cast the first stone, and the ashes of our fathers will no more be disturbed. Theirs was the fault of the age, and it will be easy to show that no class of men had, at that time, approximated so nearly to just apprehensions of religious liberty; and that it is to them that the world is indebted for the more just and definite views which now prevail.

The superstition and bigotry of our fathers are themes on which some of their descendants, themselves far enough from superstition, if not from bigotry, have delighted to dwell. But when we look abroad, and behold the condition of the world, compared with the condition of New England, we may justly exclaim, “Would to God that the ancestors of all the nations had been not only almost, but altogether such bigots as our fathers were.”

The point of this is that almost 200 years ago there were already people trying to tear down the attributes and qualities of those men that founded the nation in order to change it into their corrupt vision, which is to destroy the roots of the nation while consuming its fruits.

To lie and distort the character of the men that were responsible for laying the foundation of America is to attack America itself. And the people attacking aren’t Americans in the true sense of the word, which came from primarily Christian Englishmen and the application of English common law. There were exceptions to that, but the fathers of America were almost entirely of English stock.

This is why the people invading America over the last 50 years or so have no commonality with the descendants of those that built and founded America, and have ramped up the attacks on our ancestors in order to shame real Americans and press them to surrender who and what they are in order for the country to be taken over by those that don’t have its best interests at heart by destroying its real history, and replacing it with a lie.

This shouldn’t be considered discouraging, only that it’s nothing new and we need to face the reality that we are under attack from the left.

There is nothing new under the sun, and the same method of attack in the early 1800s is the same attack being leveled upon America today, which is to attempt to shame us into capitulating to the left by making the fathers of the country out to be among the worst in history.

Always keep in mind that the early fathers were predominately Christian, and the attack on them is a direct attack on Christianity and the influence it has had in forming the greatest nation that has ever existed on the planet.

The days are waning now as our enemies invade the nation with the help of the traitorous left, but there is rising up a people that are no longer concerned with being labeled racists, Nazis, misogynists, or the plethora of other terms used to manipulate Christians and others on the right into shutting up.

These are people that embrace the vision of our American fathers and are ready and willing to continue to build upon the foundation of Western civilization, which was first Jesus Christ, English common law, and some influences from the Greco-Roman era.

To build an even firmer foundation, we need to now look to the Bible as the source of our jurisprudence. It was there in part in the past, but we can build an even better and longer-lasting nation based fully upon the moral laws and commands revealed in the Bible.

The fathers of America were Christian men of quality character, but still flawed. To overemphasize and distort the flaws in order to subvertly attack Christianity and its foundational influence in building America, is an attempt to rip it out of the nation and replace with the godless evil that has been fighting for hundreds of years to sever the root while plucking the fruit. We must be relentless in opposing this and not to surrender to their tactics being used to wear us down.