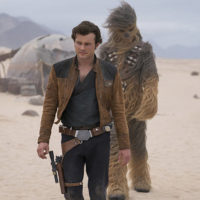 source: Disney In the latest installment from the Star Wars universe, we found out it wasn’t Han Solo’s son Kylo Ren, or Ben Solo, that killed him, it was SJW Kathleen Kennedy, a producer who was put in charge of the Star Wars franchise. Han Solo, we have discovered, was destroyed before the lightsaber was thrust through him in The Force Awakens. That was more kind than what Kennedy did to him and the Star Wars franchise in Solo. Worse, she obliterated the likeable character of Lando […]