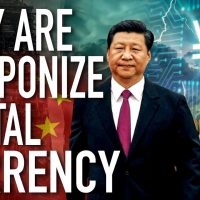 The American currency debasement is being driven by China's efforts to create a digital currency insurgency in the global financial system. Beijing has been stating loudly and clearly that it intends to bring the dollar down, and now, the most recent valuations show that the western nation's leverage in fintech and its imminent issuance of a digital currency will surely disturb the dollar monetary supremacy. In this sense, the final coup for the US dollar collapse may arrive sooner than it was previously thought. Additionally, a recent […]