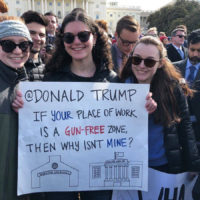 The attempt by some young people to create a meme that attempts to support gun control, was a major fail. It confirms the inability of young people to think issues through. First. Are they kidding when they say the White House is a gun-free zone? Try sneaking in and see how many guns suddenly appear. Second. Don’t they comprehend schools are already gun-free zones? Can they really not understand that a major part of the problem is the fact schools are designated as gun-free zones? There’ll be […]