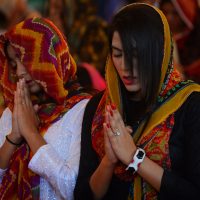 A 13-year-old Pakistani girl named Arzoo Raja, is the latest victim of a disturbing and growing trend in Pakistan, where Christian girls are kidnapped, forcibly converted to Islam, and then forced into marriage, usually with a much older male. In this case Arzoo was kidnapped by her next-door neighbor named Azhar Ali, a 44-year-old male, who she was forced to marry after the forced conversion. While her parents quickly took legal action to remedy the situation, incredibly, after filing a report with the police department, the high […]