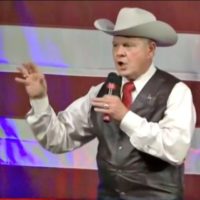 Some people continue to insinuate in the media that Judge Roy Moore has somehow refused to clearly respond to the increasingly dubious allegations of sexual impropriety almost 40 years ago. It has gone beyond the initial accusations to his response to the allegations, as if that is what will determine the truth. The reality is Judge Roy Moore has responded with total clarity to the accusations, which are without a doubt politically motivated, and initiated by outrageous behavior from Amazon’s Jeff Bezos’ newspaper, the Washington Post, which […]