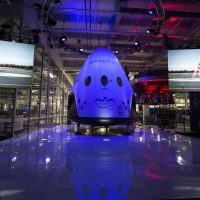 Elon Musk said in an interview with Popular Mechanics that the giant rocket called Starship, which is being developed to ultimately colonize Mars, could also be put to good use by being used to build a moon base. “Starship will also be good for creating a base on the moon,” Musk said. “We’ll probably have a base on the moon before going to Mars, added Musk” I’ve always been dubious of Musk bypassing the moon and heading to Mars first. While the challenges to put a permanent […]