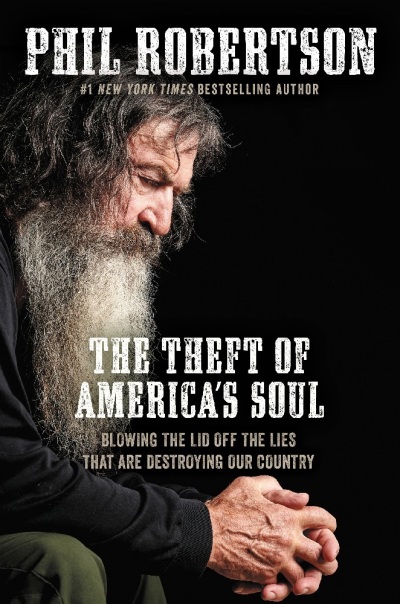 Ever since Phil Robertson first came under attack for his views on sin in general, and homosexuality specifically, he has shown Christians the right way to resist evil.

First, you don’t apologize, you don’t go on the defensive, you don’t attempt to walk back or explain your position trying to placate them, and you hit back at them harder with the truth.

Since Robertson took that route, he has received little in the way of serious attacks because his haters know he won’t lie down and let them beat him up without a fight. If he makes a gaffe of some sort they jump on it, but in regard to him dealing with substantive issues that matter, they’ve learned to leave him alone because he doesn’t back down, and neither should any Christian.

Although there are a number of exceptions to the rule, overall, Christians in our time have become cowardly and weak, as if they have to justify their faith in Jesus Christ from the perspective of changing what the truth is in order to align with the worldview of humanists and unbelievers.

This is nothing new. Elijah exposed that the children of Israel were in the same place when he confronted the so-called prophets of Baal. Here’s what he said to the people:

And Elijah came unto all the people, and said, How long halt ye between two opinions? if the Lord be God, follow him: but if Baal, then follow him. And the people answered him not a word.

Why didn’t the people say anything? Because of their loss of faith and disobedience to God, they were no longer sure who was really God. They actually weren’t convinced one way or the other, what the outcome of the confrontation between Elijah and the priests of Baal was going to be.

There was never any doubt though. Here’s how the outcome was recorded in the Bible:

37 Hear me, O Lord, hear me, that this people may know that thou art the Lord God, and that thou hast turned their heart back again.
38 Then the fire of the Lord fell, and consumed the burnt sacrifice, and the wood, and the stones, and the dust, and licked up the water that was in the trench.
39 And when all the people saw it, they fell on their faces: and they said, The Lord, he is the God; the Lord, he is the God.
40 And Elijah said unto them, Take the prophets of Baal; let not one of them escape. And they took them: and Elijah brought them down to the brook Kishon, and slew them there.

Since they had allowed the syncretism of religions within their midst and within their hearts, it took a mighty act of God to turn their hearts once again to Him, and to reveal there was no other God but Him. The result was as it should have been, they removed the leaders of the false religion from their midst by slaying them.

In our day, the way we respond is to remove the mixture of this world and its numerous false religions, first from ourselves, our families, the church, and ultimately, the nations. We do this by rejecting the false religions and cults as having any legitimacy or value in this world. Then we embrace and live out before the world the requirements of God as revealed in the Bible, and then preach the gospel to the world, including the part of the Great Commission where we’re told by Jesus to teach the nations to do obey all things he commanded. Individuals and nations are to be taught the laws and commands of God, and instructed to obey them.

As the children of Israel cried out accurately: “the Lord, He is God.” The truth is there is no other, and we need to live, speak and act in accordance with that reality, while teaching those outside the faith that they are to do the same.

Robertson recently released his latest book called “The Theft of America’s Soul: Blowing the Lid Off the Lies That Are Destroying Our Country.”

In it he lists 10 deceptions he sees that are destroying America. They are:

-There is no devil

-The truth is relative

-God did not create life

-Sex is for self-gratification

-Laws can be ignored or changed if they are inconvenient

-Unity is not possible

-Church participation and day-to-day life should be kept separate

-Christians should shut their traps

All of this is another way of saying Christians need to get more offensive in living out their faith, and speaking boldly concerning the truths revealed in the Holy Scriptures.

It’s interesting to see more Christians discovering how comprehensive our faith was meant to be in this age, and books like the one Phil Robertson wrote are needed to reinforce that reality and encourage believers to engage the world with the gospel in its entirety. That means we must go past individual salvation to teaching the nations they are to walk in obedience to all things the Lord Jesus Christ commanded.

Robertson states that Christians must go beyond the idea they have met their obligations to God by going to a church meeting on Sunday.

“They misunderstand Christianity. The American model is build a building and everybody goes up there at least one time a week,” he said.

He urges believers to live out their faith in all areas of life and speak the truth in the public square.

When recently attacked by Publishers Weekly concerning the new book, Robertson said this:

“The Publishers Weekly review is exactly what I hoped for. I decided from the very beginning that I would tell it like it is because I have not — and will not — be ashamed of the Gospel of Jesus Christ. God’s truth is always right, and I’m very proud that this notable publication has accused me of preaching it. And preach I will — more of it, and louder. That’s exactly why I wrote The Theft of America’s Soul to begin with. It is one long sermon from my heart to the soul of America.”

One of the things I like about the book is it not only describes the problems from Robertson’s point of view, but also offers 10 counter-truths to those lies, providing some solutions and answers for the reader.

The former Duck Dynasty star is a good example of someone that is not only willing and able to speak forth the truth about God, but can do so while enduring enormous persecution and opposition, while refusing to back down to his enemies.

Not only that, he hits back harder with the truth, not allowing his attackers to dictate or take over the narrative when he comes under pressure.

He understands we are to live out our faith in an ongoing basis in all areas of life, knowing it’ll take a lot of work to build the kingdom of God on earth, as Jesus taught us to pray for. It also won’t be done without opposition and persecution.

All of that should be expected, and our part is to ready to answer those that are either interested in what we stand for and why, or those that hate us for having faith in Jesus Christ.

We also need to continue to speak forth the truth as long as we have breath in our bodies, knowing that there will come a time when God gives the seeds we plant increase, and His kingdom permeates and expands across the earth, to His glory.

We must be willing to plant the seeds of the trees of whose shade we will not rest, knowing we’re being obedient to God and providing a world that future generations will be blessed by, and which gives great glory to God via their obedient and holy lives.

Even in our own lifetimes we may see some of the fruit of the seeds we plant beginning to bear fruit. Our responsibility is to remain faithful in modeling the kingdom of God through obedience, being faithful no matter what the response to what we plant is.

We are to apply the teachings of the Bible toward every area of life, redeeming them unto our God.

The Lord is God, and He will work with us as we faithfully discharge our duties in this life.