Origins of Jewish Censorship and Undermining of American Christianity 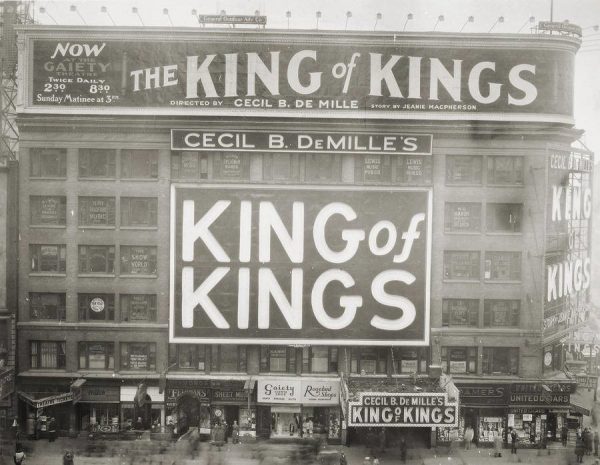 An excellent article by Andrew Joyce unveils aspects of the origin of Jewish manipulation and censorship of Christianity in America, using the 1927 film “King of Kings” as a major part of his thesis.

Below is the conclusion he draws concerning over a century of dark influence on Christians in America, who have been generally deceived because of their predilection for the Jews, no matter what they think, say or do.

Reading much of the material relating to the King of Kings controversy, I found myself quite disturbed on realizing that much of contemporary Christianity resembles DeMille’s butchered film. Almost everything that gave it some teeth in past centuries has been excised, leaving for the most part a rather toothless brute that is a tame lapdog scared of its own shadow. Yes, Christianity, excepting a few corners of resistance, has been censored. It’s been rendered safe. It’s been declared “Jew-friendly.” Most importantly, it looks nothing like its original form, its ‘Director’s Cut’ so to speak. The fact that Jews even feel secure enough to now demand that the New Testament should come printed with “anti-Semitism warnings” really says it all.

The King of Kings censorship campaign also highlights the unique relationship that Jews have with censorship. Cultural censorship, of course, is not limited to Jews, and calls to limit speech or expression have also been common among Jews and Christians. The difference is that Christians in the twentieth century were often most heavily involved in attempts to limit or remove obscenity in culture, whereas Jews were most often leading the battle to advance the same obscenity in the name of “free expression.” American Christians, and Catholics in particular via organizations like the National League of Decency, often campaigned for censorship on behalf of abstract moral values like decency and modesty rather than for themselves as a church or a people. Jewish involvement in censorship, on the other hand, is without exception always self-interested. As mentioned above, Jews are extremely liberal in their advocacy for the freedom to view or consume material regarded as morally destructive, but have been nothing less than relentless in their pursuit of legal methodologies and other forms of pressure designed to limit any speech or activity that would bring them into criticism or otherwise harm their interests as a group.

It’s far past time for Christians to stop giving Jews a free pass when their words and behavior are opposed to Jesus Christ and His people.

If you ever do your homework, you’ll be shocked at how elitist Jews, throughout the years, have attempted to distort and destroy Christianity and its impact on America and the world.

It’s far past time for the Jews to repent of their sins and have faith in Jesus Christ the promised Messiah, who wasn’t afraid to call out the Jewish leaders of that day for what they were. Neither should we be in our day.