Most Media Not Reporting on Murder Trial of Abortionist Robert Rho 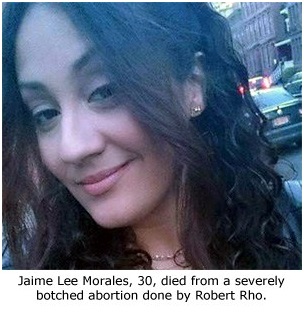 Most media outlets have given a collective yawn to the murder trial of abortionist Robert Rho, who botched the procedure on 30-year old Jaime Morales, who died later that evening after being released from his care.

According to Operation Rescue, Morales started to bleed heavily in the recovery room, when Rho decided she needed a second procedure, which “did nothing to control the bleeding.”

After collapsing at the clinic , Rho still released Morales into the care of her sister, which when driving her home, Morales fell of the back seat and ended up being non-responsive from the heavy hemorrhaging.

She was transported to a hospital where she died later that evening.

Rho has been charged after being determined to have been reckless in regard to Morales’ medical care.

Troy Newman, President of Operation Rescue, concluded this: “Rho didn’t just make a small mistake, he literally butchered her then kicked her to the curb. We have high praise for the prosecutors that had the courage to seek justice.”

Rho was arrested on October 11, 2016, where he entered a “not guilty” plea in regard to charges of “Second Degree Manslaughter (Reckless Homicide), a Class C Felony that carries a penalty of 3 1/2 to 15 years in prison.”

Another casualty as a result of the culture of death.