Love is the Fulfilling of the Law 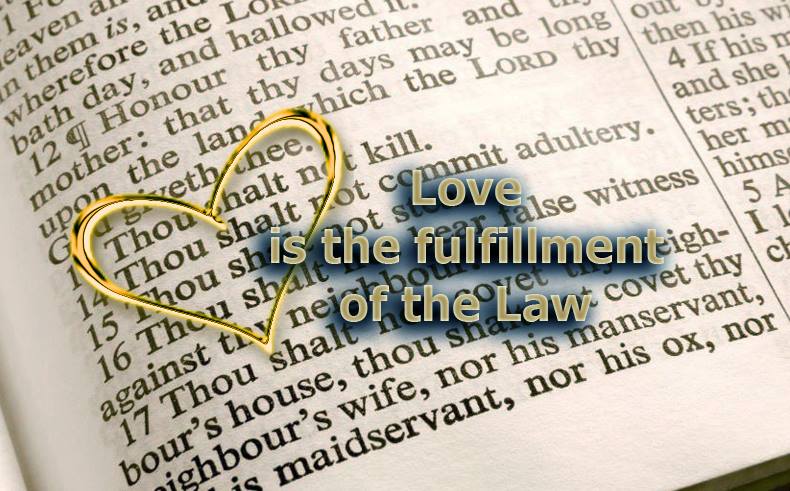 It continues to baffle me how so many Christians are manipulated or dishonest about the fact that the moral laws God revealed to, and given to Moses, are still in force to this day.

Those that are confused on the matter usually read a couple of verses that give the impression that the moral laws given by God have been rescinded, when in fact, the majority of time it’s referring to the law not having anything to do with our justification before God; only the work of Jesus Christ on the cross takes away the penalty of our sins.

The ceremonial laws are of course no longer in effect, as well as a few of the laws directly related to Israel and the land. Even so, the moral laws of God, which are based upon His very nature, are eternal, and will never pass away.

As Jesus said, in Mt. 17:17, “Think not that I am come to destroy the law, or the prophets: I am not come to destroy, but to fulfil.” We are to follow His example with the help of the Holy Spirit.

Love is the fulfilling of the law

As it states clearly in Romans 13 above, “love is the fulfilling of the law.” Even with the clear context of some of the ten commandments listed before this truth, many people define love here as some type of nice emotional feeling someone is to have toward another.

No matter what our emotions are toward another human being, we are to still treat them in accordance with the revealed moral laws of God; emotions have nothing to do with it in regard to our actions.

I want to keep this article very concise and short so people can digest the fact that Jesus Christ requires us to obey the moral laws He gave to Moses on the mountain.

While they are represented in general by the ten commandments, there are many more laws associated with them that are identified as ‘case laws.’ These laws provide the answers to many of the issues of life and how to deal with them from God’s point of view.

Anyone that hasn’t read and studied the moral laws in the Bible, will be very confused by many texts that are based upon them.

As I’ve mentioned in the past, the only type of revival we need is one that once again focuses on the moral laws of God. We need to embrace them and dig much deeper into them in order to effectively and accurately implement them in our individual lives, the lives of God’s people, and to teach the nations all that Jesus Christ has commanded us, as He stated in what most call the great commission.