Jesus’ Kingdom: The Birthing Of An Alternative Civilization 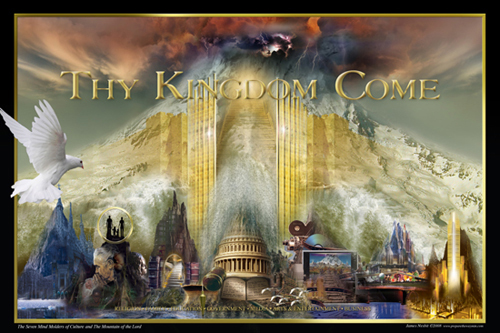 33 Then Pilate entered into the judgment hall again, and called Jesus, and said unto him, Art thou the King of the Jews?

34 Jesus answered him, Sayest thou this thing of thyself, or did others tell it thee of me?

35 Pilate answered, Am I a Jew? Thine own nation and the chief priests have delivered thee unto me: what hast thou done?

36 Jesus answered, My kingdom is not of this world: if my kingdom were of this world, then would my servants fight, that I should not be delivered to the Jews: but now is my kingdom not from hence.

37 Pilate therefore said unto him, Art thou a king then? Jesus answered, Thou sayest that I am a king. To this end was I born, and for this cause came I into the world, that I should bear witness unto the truth. Every one that is of the truth heareth my voice.

In verse 36 above, we have one of the most misunderstood statements in the Bible, when Jesus stated His kingdom is not of this world. The usual interpretation and understanding of that Scripture is we aren’t to expect the kingdom of God to be built on the earth.

But the fact is the phrase ‘not from hence’ refers to the source of the kingdom of Jesus, which is heaven. It doesn’t mean it’s some type of mystical invisible kingdom that resides in heaven, but isn’t meant to be built on the earth.

Another fact is the word ‘world’ there isn’t the same as planet earth, it is the word for age. So many people get confused between the two, thinking they are one and the same.

When we are taught to not love the things of this world, it’s a reference to this age, not planet earth. The age, essentially, is where we see the imprint of Satan within a people, and displayed outwardly in a wide variety of ways across the entirety of the various cultures and people or nations of the world. That is what we’re not to love.

Jesus didn’t teach us to pray for His kingdom to come and will to be done in the world, but rather, on the earth. That needs to be understood in order to comprehend what it is He’s after on earth.

The kingdom of Jesus Christ is an alternative civilization

The point of all of this is Jesus was teaching Pilate and us, that His kingdom has zero interest in taking over that which Satan permeated in this age. Instead, His strategy was to birth a new civilization as revealed in its essence in the revelation of New Jerusalem coming down out of heaven in the last couple of chapters of the Bible.

That is part of what He revealed in the parable of the tares and wheat. They are going to be allowed to continue to grow to the fullness of their expressions on the earth, until the final day when Jesus returns to resurrect us.

How Jesus works in general is He ascended back into heaven where He came from, and when a person and ultimately a people are regenerated, He works from the top down, only in the sense that we’re born from above by the Holy Spirit.

The way it works on earth is from the Holy Spirit dwelling within, He starts to transform us into the image of Jesus Christ, which over time, will be expressed in all aspects of live on the planet.

That is part of what the tabernacle meant, where it was built with the holy of holies, holy place, and outer court. That is the meaning of out of our innermost being will flow rivers of living water; the outer court representing the visible expression of that which is being worked within to without. That’s also what it means when we see it corporately described and expressed in the New Jerusalem, where the river flows out from the throne into the earth.

At the center of all this is the lamb in the midst of the throne, which means the salvation provided by the sacrifice of Jesus Christ to bring us forgiveness of sins, while at the same time, throne, which primarily represents justice judgement that is based upon the laws and commands of God.

After all, the great commission includes the preaching of the gospel as well as teaching the nations to obey all the commands of Jesus Christ.

In the end, what this means if Jesus Christ dwells within regenerated or born again saints, by the means of the Holy Spirit that comes down out of heaven to dwell within them.

From there we are to work out our salvation with fear and trembling, meaning that which is working within us is to be expressed without into the outer court or world, by means of the various activities or outlets we participate in.

We don’t do this for the purpose of propping up the old creation and its top-down order, rather, we work in such a way as to replace that old creation with the new creation; not for the purpose of using its authoritian, top-down structure, but through the means of an endless number of interactions that undermine the need of centralized, governmental control.

For most of us this means working to offer alternatives to centralized power by focusing on providing various products or services to people at the local level; this includes many ways of developing charities to target the specific needs of the people where we live.

It also means getting married, having children, raising them outside the educational systems of the world, and teaching them the laws and commands of God are to be embraced and obeyed.

The old creation and civilization is dead, deteriorating at a slow pace. Jesus provided the answer to that by burying it on the cross and raising up in newness of life a people that are born from above while dwelling on planet earth.

Our goal shouldn’t be to take over the poison planet as reflected by the work of Satan in this fallen world, but to understand Jesus Christ has birthed a new creation from above, which is the kingdom of God we’re praying to come on the earth as it is in heaven.

Jesus had no interest in running the world system when He was on the earth, and neither should we now.

Instead, we need to be broken vessels before God that cooperate with the work of the Holy Spirit in transforming us into the image of Jesus Christ, which includes His character, obedience to the laws of God, and having dominion over the planet.

We aren’t to do this through centralized governmental control, but rather, primarily outside the political process, which through a multiplicity of works, provide solutions to our local and regional communities that wean them off of dependence on the government, and learn to supply their wants and needs through self-government.

When done this way, I think of it in terms of a trickle-up strategy. When we solve problems outside of the government – without government money – over time it’ll filter up to government levels, bringing about a smaller government that operates within the very limited confines God has outlined for it in the Holy Scriptures.

This is what the new creation civilization is all about. Jesus didn’t call for His servants to fight against the Jews of His day, or the Roman empire, because He had no interest in taking over a poisoned, dying world, rather, His strategy was to birth a new civilization that would be based upon His very image, and would shine as a light in this dark age that is fading away, as John stated in his 1st epistle (1 Jn. 2:8).