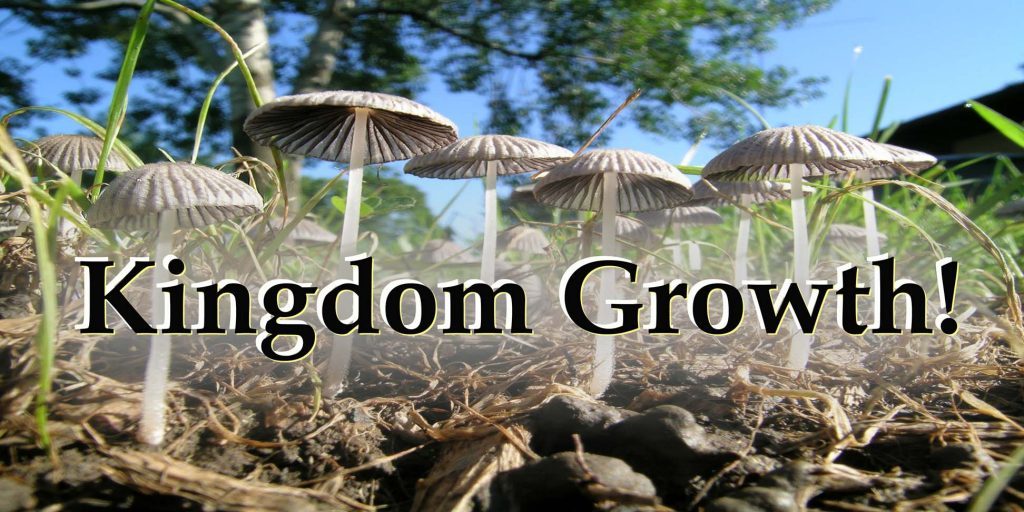 One of the weaknesses of human beings, and Christians in particular, is the propensity to view seemingly slow progress as a failure to plant and water the right things.

While that is true in some cases, overall, the truth is it usually takes a number of years of faithful service before we start to see the type of growth we hoped for in the beginning of our project or service.

This is true whether it’s evangelism, starting a business, launching a charity work, or any other segment of life. The fact is it’s far more healthy to lay an enduring foundation in the early stage of any work or project, and from there build upon it.

In the investing world there’s what is called a hockey stick graph. You can see it below. What this suggests is for a time any one investment that has potential will grow at an incremental pace, and then when it hits a certain target, takes off as if something happened that triggered the big jump in value of a company.

There are of course short-term catalysts that can temporarily give a public company a quick boost in its share price, but companies that grow over the long haul, will usually seem to be doing nothing for a prolonged period of time, and then suddenly will explode in value.

This is true in almost everything we participate in in life; although there are always a few outliers that fly outside the norm. Those are few and far between, and aren’t something we should count on when engaging in any type of work. The vast majority of people will experience hockey stick growth if they have chosen the right project and keep at it until they succeed.

We’ll look at a couple of different areas of life to provide examples of how faithful service and application over time can result in extraordinary growth.

As it relates to the kingdom of God, think of it in terms of the aggregate service offered around the world in thousands of localities. This isn’t primarily referring to individual service, although it definitely can apply to it.

A lesson from a high-growth company

One of the best performing companies over the years that has flown under the radar is Constellation Software Inc. (CNSWF). As you can see in the graph below, as of early 2019, it has outperformed Amazon.com. for more than a decade. Very few people know about this, and the CEO likes it that way. 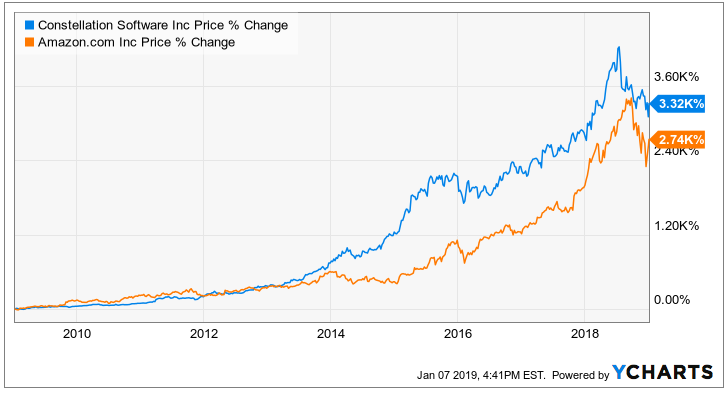 For our purpose, the point is that from 2006 through 2012 the company, while growing at a decent pace during that period of time, started to really take off from 2013 onward, as the numbers confirm.

The point is, small gains add up quicker than you think over time, even though they don’t seem to in the near term; and when it hits a certain point, the growth trajectory starts to explode for companies with solid business models that are competing in a growing market.

Another example from the investing world is day trading, which I participate in. When starting with a small account, which everyone should until they learn the ropes of this investing segment, it seems to take forever before the account starts to consistently grow. That’s because it takes time to learn how to make good trades that generate a profit and add to the account.

The key with day trading, to use a baseball analogy, it to be content with hitting singles or doubles. Those trying to hit home runs end up blowing up their accounts, which means they lose most if not all of their seed capital.

When being content will small games while learning to build up consistency, a small account starts to grow nicely, and when it reaches a certain size, traders can then start to increase their positions in certain plays that provide even more potential profits, even though the percentage of investment as measured against the size of the trading account doesn’t increase.

Over time, this is what creates the hockey stick graph growth rate. For a period of time an account doesn’t seem to grow much, but those that learn to trade these types of stocks profitably, can build a lot of wealth over the long haul.

Under his ministry methodology, well over 100,000 churches have been planted, and millions of people have come to know Jesus Christ as Savior and Lord.

There are a lot of things to learn from Watson, but within the parameters of this article, I’ll focus on a few.

Watson states over and over again when talking to people that the way to exponential growth concerning the kingdom of God, one has to go slow to go fast. He also adds that in order to win many, we must focus on the few. Last, he will refuse to continue teaching and training someone if they aren’t teaching and training others.

Generally speaking, that’s the secret to the success of the growth trajectory of his ministry, although there is much more that adds to the quality of that growth, and not just quantity.

Here’s a short video where he talks about his belief that within a generation, which he defines as 30 years, the whole world could be won to Christ.

No matter what the area of life God has called you to operate within, the simple principles laid out by Watson above will work. The key is to be patient in the early years of planting and watering.

When any new thing emerges that has potential to change the world, usually what happens is people believe it’ll take too long for it to take off once the hype wears off. But for those that stick with it, they start to underestimate the rapid growth once the hockey stick trajectory starts to take off.

Interestingly, one of the most well-known Christians in the 20th century, Frank Laubach, had a similar strategy, which he called ‘each one teach one’, he was referring primarily to literacy, which was his main calling in the second half of his life, and secondarily to evangelism, where each person would work to win one to Christ. I sometimes wonder if Watson got some of his ideas concerning growth from Laubach.

The point is that Laubach and Watson understood that to have an influence that was capable of changing the world, it would take dedicated individuals that were serious about building the kingdom of God, and not their own kingdoms.

What I mean by that is when people start winning people to the Lord by working with the Father who draws them unto Jesus, while also teaching to obey the laws and commands of God, it isn’t for the purpose of trying to put the wine in one container, it’s for the purpose of expanding to the point where their are thousands of containers, or churches birthed.

Watson has stated that the work stops when people start constructing church buildings. That’s not to say it’s never to happen, only that it appears Christians lose sight of what got them to where they’re at, and the work stops because the demands of teaching others is abandoned.

No matter what we put our hands to, there are ways that this methodology can be applied to the specific areas of life we’re called to serve in.

When taking into consideration the idea of going slow to go fast, it makes sense when it’s applied to others teaching what they’ve been taught to others, whether concerning the church, evangelism, business, family, charities, government, entertainment, and many other areas we put our hands to.

Last, this isn’t to suggest everyone should consider going big with their callings, only that within the parameters of where God wants you to grow, these things will work until your reach the limits of the growth of your calling.