Hollywood and Mainstream Media: Pedophilia is Entrenched in the Culture 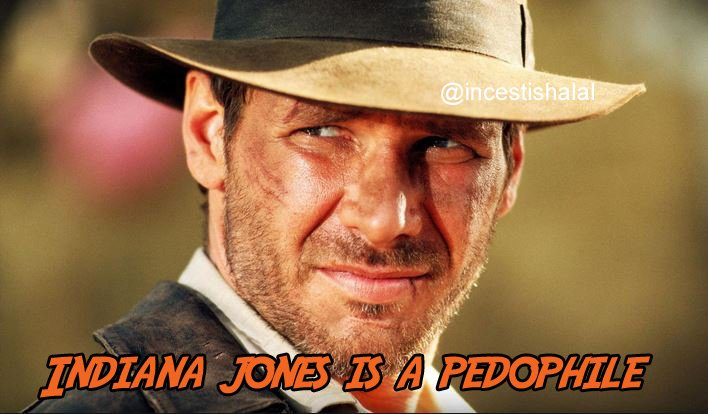 A must-read book about the victim of incest and pedophilia, and her victory over the horrid abuse.

Some may be shocked to find out the character Indiana Jones was written into the script as a pedophile, with Marion being 11 at the time when engaging in sex, according to the “RAIDERS OF THE LOST ARK” Story Conference Transcript

Go here for the original transcript

Go to the last line on page 24 and most of page 25. George Lucas is (G), Steven Spielberg is (S), and Larry Kasdan is (L). George Lucas talks about Marion being 11 when she had an affair with the character Indiana Jones.

His words were it “would be amusing to maker her slightly young at the time.”

Steven Spielberg gushed out after Lucas’s above comment that she should be “promiscuous” and come on to him.

Lucas said having here be very young was outrageous but interesting.

Even those people in Hollywood that seem fairly normal are twisted and dark. To even banter these ideas around are disturbing. If you remember the film, the character of Marion actually told Indiana what he did was wrong. The underlying assumption was Indiana Jones was a pedophile. The question is why would these people want that to be the backdrop of their relationship

The book I’m recommending below is a dark and troubling one, but it gives many details of evil and corruption in Hollywood.

Another important and troubling book is the true story of a victim of her pedophile parents in the science fiction community.