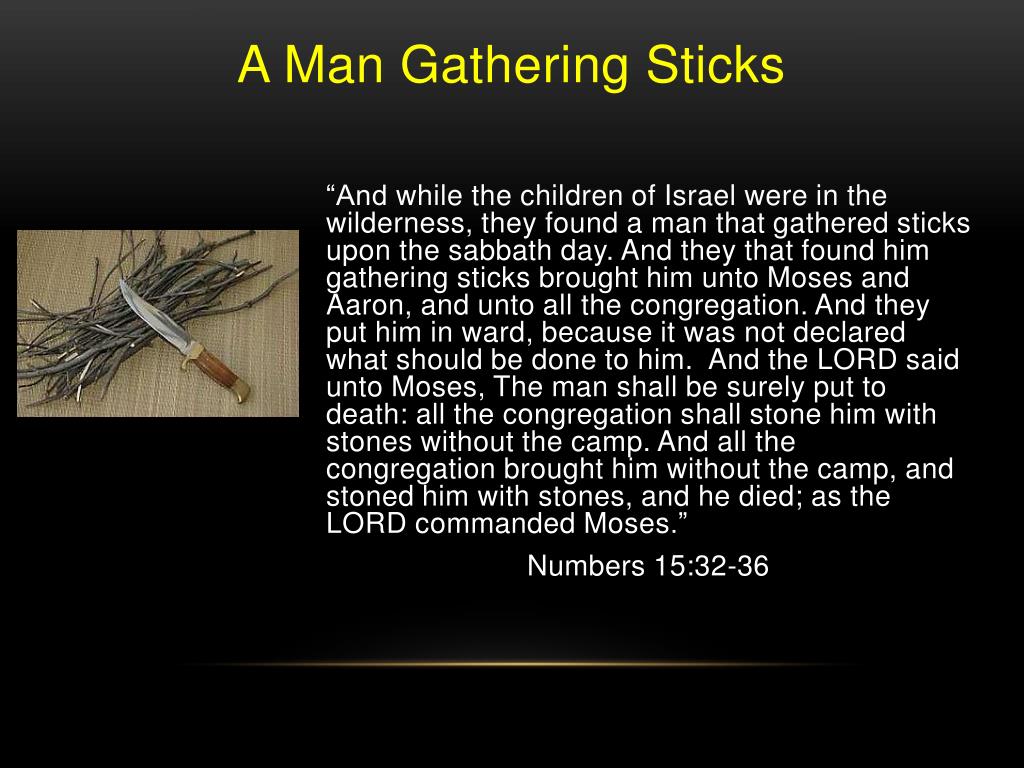 13 Speak thou also unto the children of Israel, saying, Verily my sabbaths ye shall keep: for it is a sign between me and you throughout your generations; that ye may know that I am the Lord that doth sanctify you.

14 Ye shall keep the sabbath therefore; for it is holy unto you: every one that defileth it shall surely be put to death: for whosoever doeth any work therein, that soul shall be cut off from among his people.

15 Six days may work be done; but in the seventh is the sabbath of rest, holy to the Lord: whosoever doeth any work in the sabbath day, he shall surely be put to death.

32 And while the children of Israel were in the wilderness, they found a man that gathered sticks upon the sabbath day.

33 And they that found him gathering sticks brought him unto Moses and Aaron, and unto all the congregation.

34 And they put him in ward, because it was not declared what should be done to him.

35 And the Lord said unto Moses, The man shall be surely put to death: all the congregation shall stone him with stones without the camp.

36 And all the congregation brought him without the camp, and stoned him with stones, and he died; as the Lord commanded Moses.

I find the story of the man found gathering sticks on the Sabbath an enlightening one, as on the surface, it doesn’t make a lot of sense for it to be in the Bible.

The reason I say that is because the penalty for doing work on the Sabbath was death, as it was first stated in Exodus. So, the question is, since the man was found to be working on the Sabbath, why would something so obvious be presented to the reader to learn from, when we already knew that God had already instituted the death penalty for breaking the Sabbath.

There are several things to unpack here. First, we know something unique is happening in the narrative, and that is the fact that God got directly involved in what should have been a very simple matter to deal with. That in itself speaks to something that is not obvious being taught here.

Why I bring that up is because from the beginning God had told Adam to have dominion over the earth, which after sin occured, also meant engaging in justice and judgement concerning how people treated God, and how they treated one another, in light of the laws God gave them through Moses. That’s significant because God always wants us to build spiritual muscle by taking responsibility for what is happening on the earth.

So to intervene in what apparently looked like a open and shut case, means we’re meant to learn something beyond the fact that someone broke the law that required the death penalty; that was already known.

The first thing I want to look at is the crime itself, which was gathering sticks. This is interesting because we’re told nothing about the why of the stick gathering, only that the man had done it.

For example, was it nothing more than walking around picking up a few sticks? Was he doing it for someone else in an act of charity? Maybe he did it on behalf of others and got paid for it. Whatever the reason, we are not told why the man did it, only that he broke the law.

That suggests to me the story isn’t included for the purpose of why he did it, or possibly even that he did it. I think there’s another lesson being taught here.

What wasn’t in play

One thing to take into consideration in the story was that the man wasn’t temporarily locked up because Moses and the other leaders were squeamish about the possibility of a man being executed. Remember what happened when the Levites supported Moses and took the sword to their fellow Israelites after the golden calf incident, where they killed approximately 3,000 people at the order of Moses.

The point here is Moses and his fellow leaders weren’t worried about executing God’s penalties upon the man because they personally found it an undesirable thing to have to do.

What is in play

I think the key to understanding the implications of this verse is in the general way the crime committed by the man was only generally stated. We are told nothing about the sticks, yet a detailed explanation of the process is what is focused on.

I’ve said all this to present my thesis that this verse was included in the Biblical text in order to teach us that we must learn the laws and how to apply them to everyday situations. That is why I think the lack of clarity concerning the exact nature of the infraction was left out of the narrative.

God wanted us to look at the overall crime and take note that even in the easiest and obvious matters concerning the law, we can’t get lazy in looking closely at each case that is being litigated, especially when someone’s life is hanging in the balance.

Next, we are required to search out the laws of God and find, to the best of our ability and the help of the Holy Spirit, what the law actually means, and when situations arise that may seem hard to understand, we are to be true to the law and obey God in the penalty phase required by Him.

In the portions of scripture above, they focus on a couple of situations where the disciples and Jesus engaged in actions on a sabbath. With the disciples, it was when they went through a field and took some corn and rubbed it in order to remove the kernals and eat it.

With Jesus, it was when He stood in the presence of the Pharisees and healed the man with a withered hand, knowning that they believed He was guilty of sin by breaking the sabbath.

The response of the Pharisees to the healing was “… they were filled with madness; and communed one with another what they might do to Jesus.”

For the purpose of this article, the point being made is that we must take into consideration the whole counsel of God when looking to how to embrace and teach laws that are to be inserted into the legal codes of the nations.

Going back to the man gathering sticks, the question that arises is why was he executed, while the disciples were defended by Jesus Christ Himself in regard to working on the sabbath?

For a reason we’re not told, there was uncertainty concerning whether or not the man gathering sticks on the Sabbath was to be executed. So, instead of just sentencing him immediately, they locked him up temporarily until they knew what direction to take.

We aren’t even told that anyone, including Moses or Aaron, asked God what to do; it’s simply implied in the text. All of this is important to consider because of the fact the law was about as clear and easy to understand as it gets – or at least it appears that way.

The bottom line is the law remains in force, but we have a long way to go before fully understanding how it is to be applied in specific cases. With the man gathering sticks, something obviously was included in what he did that made them hesitate in going forward with the obvious penalty for working on the Sabbath.

Again, why we aren’t told is because it appears God wants us to focus on working through the implications of the law as it relates to a party accused of a crime, rather than focusing on the specific crime mentioned.

One last thing I do want to mention about the stick gathering in and of itself is, that there was already a precedent in place concerning gathering manna. God would send enough for two days that could be gathered together on the day before the Sabbath.

That seems to point to the strong probability that anything else that would be needed on a daily basis would be put in place for a couple of days so there was no need to work on the Sabbath. If the man needed sticks on the Sabbath for warmth or cooking food, it would have been easy to gather them together the day before.

So whatever the reason behind the infraction, from the point of view of God’s law, it was irrelevant.

To conclude, we are to read and learn God’s laws; look at how it’s applied in the Bible; and in difficult cases, take the time to closely examine the situation in light of God’s commandments, and make a decision on what to do from there after careful consideration and counsel.

While I’m not convinced this law is still in effect because Jesus is our Sabbath, it doesn’t take away from the fact we are to spend significant time reading about and understanding God’s law and how to apply them to all of life.