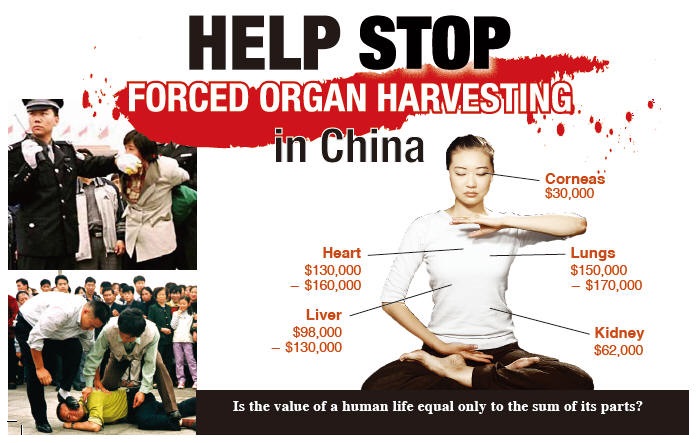 Stop doing it with unborn babies as well

The value of human life continues to erode, with the latest victims coming from the organ harvesting business in China (Amazon link to good book on the subject), where it appears the country is taking organs from prisoners of conscience and selling them to those in need of various types of organ transplants.

Reports are that even “underground” Christians, along with members of Falun Gong, Tibetan Buddhists, and possibly Uighur Muslims are representative groups being harvested for their organs.

The Wall Street Journal reported this:

The charge is that many prisoners of conscience—Falun Gong members, Uighur Muslims, Tibetan Buddhists and “underground” Christians—have been subjected to medical testing and had their organs forcibly removed. Those organs have fed an enormous trade in organ transplants.

If you don’t have a Wall Street Journal subscription, go here for the full article.

While the article goes on to point out the gruesomeness of the practice, along with presumed moral outrage, it leaves a lot to be desired when you think of the holocaust in America coming from abortions, which in many cases participate in the practice of harvesting organs from babies for the same reason.

The idea that babies are considered less than human against the adults being harvested against their will, is the epitome of hypocrisy and outrageous moral blindness.

We all need to be against the growing culture of death for all human beings, including babies in the womb or that have just been delivered.

Until the West stops the abominable war on babies, it can spare us the moral outrage it flings at harvesting adult human organs because it happens to be done in China.

The idea that abortion is acceptable for harvesting baby organs while the same isn’t true for harvesting organs for adults, boggles the mind. Both practices need to be made illegal.

I’m a Child Not a Choice sticker