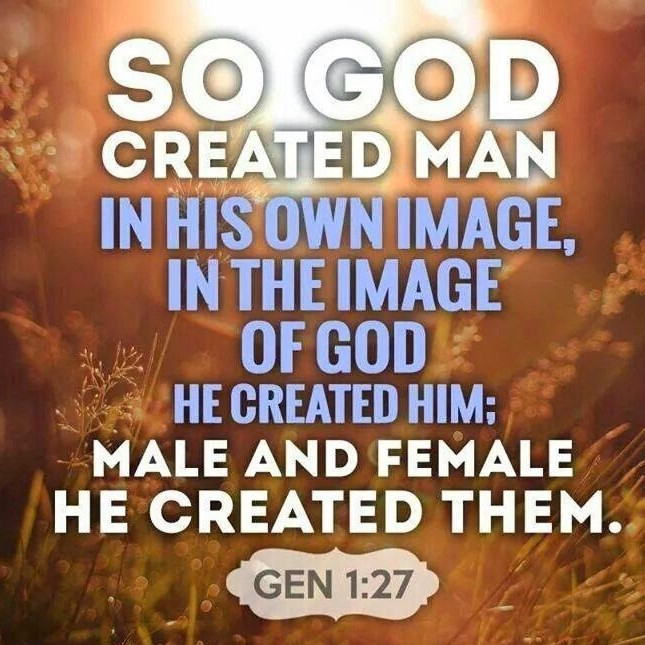 All of the universe was created based upon the person of God, with mankind being made in the very image of God.

In the beginning there was only God, and there was nothing outside of His person and thoughts. That means everything that was created was based upon something of who He is, whether a grasshopper, mosquito, cow, dog, frog, or anything else.

This doesn’t suggest they represented the image of God, as only mankind did that, based upon their being made triune, having a spirit, soul and body. This is why they are called to have dominion over the remainder of creation, which at most have a soul and/or body.

That’s important to understand because we as His people are to search out the things of creation and learn more about God from that. To do that without embracing the fact God is reflected in all creation, would mean we would also have the capacity to learn of things unrelated to God because they weren’t based upon who He was and has always been.

This is why Proverbs 25:2 states that “It is the glory of God to conceal a thing: but the honour of kings is to search out a matter.” Bear in mind that we’re a kingdom of priests, meaning the kingly role of searching out a matter is part of our heritage and way of life.

And since God conceals a thing, it means when we search out and find out more about a matter, we discover more about Him. All of this will be confirmed by the Holy Scriptures. Searching out and researching the created universe will reinforce and confirm who God is as revealed in the Bible. No knowledge or understanding we acquire as a result of doing research concerning His creation will contradict His written word.

Part of being made in the image of God is the desire to search out the things of God with the help of the Bible, the Holy Spirit, and others that are farther along in their walk with God, assuming their standard is the Holy Scriptures.

9 But as it is written, Eye hath not seen, nor ear heard, neither have entered into the heart of man, the things which God hath prepared for them that love him.

10 But God hath revealed them unto us by his Spirit: for the Spirit searcheth all things, yea, the deep things of God.

11 For what man knoweth the things of a man, save the spirit of man which is in him? even so the things of God knoweth no man, but the Spirit of God.

So with the Scriptures teaching us that the Spirit “searches all things, yea, the deep things of God,” it reveals to us that God had full knowledge of Himself, basing creation upon that self-knowledge. In other words, there is no knowledge that exists outside of God, meaning all things were created based upon the reality of who He is.

This reinforces my thesis that at the time of creation, God was self-contained and no knowledge existed outside of Himself. The idea of God creating without it reflecting Himself wouldn’t make any sense; it would be counterproductive to His purpose in creating in the first place.

In 2 Corinthians 10:4-5, this is reaffirmed as it relates to God’s people.

This doesn’t mean we can’t be extraordinarily creative, it only means we use our creativity in a manner aligning with the thoughts of God as revealed in the Bible. There is a lot of subjective room God gives us within the parameters of His objective truth. Adam naming or classifying the animals is an example of that.

God gave Adam the revelation of having dominion over the earth and everything on it, and within those parameters was allowed to classify the animals as he saw fit.

There is plenty of room for experimentation, adaptation and creativity within God’s world and will, but the conclusions we draw from these can and will never contradict the revelation of the Holy Scriptures.

As we discover more of how the world works, we’ll find out more of who God is and how to more effectively take dominion over the planet.

Our thoughts must be obedient unto Christ because all things were made by and for Him. To attempt to exalt ourselves against that knowledge is to take on the same attitude Satan had when he declared he would be like the Most High.

Interestingly, to attempt to be like the Most High is to already concede it’s impossible, for there is nothing higher than the Most High. To be the Most High means everything and everyone else is under Him.

Those who attempt to exalt themselves against the knowledge of God and the accompanying truth or reality, find themselves suppressing truth and attempting to construct a world of their own making that is observably false and illusory.

This is why so many Christians scratch their heads and get alarmed over the obvious insanity of SJWs and liberals that try to portray and build a world that has no foundation or principles, and has no future. For that reason they conclude there are no nations, no hell, no borders, no genders, no God, and a host of other things created in their own minds because they have no foundation in the truth.

Jesus Christ declared He was the truth or reality. That which isn’t determined by or built upon Him in this world results in an insane worldview and way of thinking that can’t sustainably be lived out without destroying the real world we live in.

This is why we must vigorously oppose them at every turn, or the world will become more of a reflection of the demented devil and his followers, than that which God created it to be, which is a world ruled over by His people based upon His very image, which is His character, holiness and governance in all areas of life.

We are to bear His image by being transformed by the renewing of our minds; taking on His characteristics, walking in obedience to His commands, and exercising dominion in this world based upon the revealed word of God, applying it to all areas of life.

That is the new creation. Nothing can stop it from becoming a reality in this age.