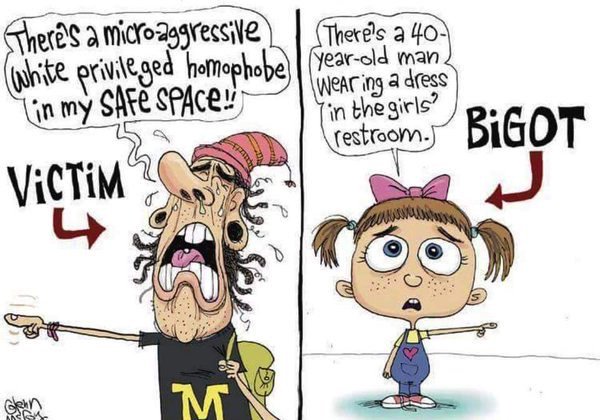 Let’s start things off with getting to the point quickly. According to God Almighty, the transgender of either sex is an abomination unto Him. It’s not acceptable or allowable in His eyes. There is no way to get around this, and these rebellious people are to have no sympathy from Christians.

The reason why there should be no sympathy from Christians or others that know its wrong, are it generates the disastrous idea they are victims. They aren’t victims, they are people that have chosen to reject God. They aren’t confused, they have, for a variety of reasons, rejected the reality of the gender they were born as.

Now when saying they aren’t confused, I’m not referring to the young children being abused by adults that present to them the idea they may not be the gender they were born as at birth. The impressionable young children can be manipulated into many things at that age, and so their confusion is understandable.

What I’m talking about is these people rejecting their gender are making the decision to do so. They are rejecting reality and embracing a fantasy that could have immense consequences if we don’t rise up and completely resist it. Not only that, many of these people see many benefits of taking on the identity of the opposite sex, including access to private spaces and legal benefits that wouldn’t otherwise be afforded them.

Understanding the impetus behind it

For Christians, it has to be understood that Satan is the power behind this abomination. When he decided to resist the reality that was God, he lost contact with reality. Consequently, he must develop an alternative reality in order to offer himself as the god of this world. This leads to inversion of God and Jesus Christ as the truth and reality.

At its core, it means to turn things inside out or upside down. That is reflected in their attempt to redefine marriage, gender, freedom, and a plethora of other traditional truths that have been in place since creation.

Many of you won’t understand this, but they’ve used the concept of ‘equality’ as a Trojan Horse to infiltrate Christians and conservatives with their ideas and actions, causing many people to enter into a state of paralysis because of their inability to separate everything into understandable and rational thought.

The bible reveals this clearly in Isaiah 5:20:

20 Woe unto them that call evil good, and good evil; that put darkness for light, and light for darkness; that put bitter for sweet, and sweet for bitter!

That’s inversion in a nutshell. It takes that which is based upon the truth and reality that is in and revealed by God, and turns it upside down.

For anyone reading this, from this day on, I appeal to you to reject the word equality. It doesn’t mean what it meant a century ago (if it ever meant it), and has come to be a word used to manipulate and intimidate those that oppose lies and falsehood.

Remember, Satan is the father of lies, and inversion is one of the chief ways he attempts to cause Christians and others to freeze like a deer caught in the headlights of a car. What he’s done is leveraged the idea of equality and made it into an abominable lie that is infiltrating the minds and hearts of men and women, and spreading across all areas of truth, reality and beauty, bringing about confusion as to whether or not there are such things in the first place.

The result is, like Satan, people create their own reality when they reject the truth. Those creations are in no way connected to truth or reality, but they lie to themselves by their inversion of truth and live in a artificial bubble is always on the verge of popping. This is why they rage and roar when they are confronted with the truth, usually using the now irrelevant idea of equality to justify their insane way of living in and thinking of the real world.

I want to reinforce again what happened when Satan rebelled against God. The fact he rebelled against God meant he rejected truth and reality. That in turn meant in order to be like God, in his mind, he had to offer an alternative. That alternative is the inversion of truth as revealed in the bible. That is what is playing out before us in the world.

The war on God and truth has been going on since the rebellion of Satan and the fall of mankind. From that understanding, it’s apparent that nothing new is really happening in our generation.

What is different is the emergence of technology that can be leveraged and manipulated to give the impression of overwhelming support of lies and falsehoods.

For example, groups of significant size will get a bunch of e-mail accounts and sign up for a variety of social networks under different profiles or names. From there they coordinate together to sent e-mails or post content on the social networking sites to give the impression of a swell of support of various lies, while doing the opposite with things they oppose.

This is a twisted form of social proof, which gives weak men and women the idea their enemies are more powerful than they really are. That said, if they do it long enough the general population starts believing the lie, and it can become a self-fulfilling prophecy. Eventually it can grow to the point it literally becomes the dominant position of the population.

This is why I said at the start of the article concerning men pretending their women and women pretending their men is an abomination to God, and for the vast majority of adults, it’s a war on truth and traditions that have built and held Western civilization together.

We should never consider these rebels against God as victims of anyone; they’re victims of their own lying delusions that they’re partaking in to destroy the idea of genders as created by God (in other words it’s an attack on God’s very image – male and female made He them). These people oppose themselves and aren’t worthy of our empathy. As mentioned earlier, young children being abused by those making them question their gender, is different. We need to fight on their behalf to keep them from destroying their lives and turning into a permanent abomination before God.

While it obviously includes that, it’s the entire reasoning behind why they do it in the first place that is at issue.

What’s at stake here is the fact men and women are completely different, and as mentioned earlier, represent the very image of God – together. To blur the distinction between men and women is a direct ambush and assault on the image of God.

Unfortunately, the seeds of that in the modern day were sown in the feminist movement long ago, which evolved into the idea men and women had no differences between them. Feminists support this because to face the reality of the numerous differences between the genders would mean they couldn’t use the equality card to manipulate public opinion, and ultimately, legislation, which we’re seeing now.

The left has weaponized feminism, equality and civil rights by positioning them as untouchable and indisputable ideas that aren’t allowed to be challenged, without being called a racist, sexist, nazi or misogynist.

As usual with the lying and increasingly evil left, they completely change the original intent and meaning of the words, while retaining, in the public mind, the secular sacrosanct association of them to victimhood.

Consequently, the weak right falls under the spell of their assaults and backpedal almost every time these words are used in relationship to anything they’re trying to do. This is why transgenderism is being presented as civil rights, rather than the evil practice it is becoming, which in the end, attempts to place men in the private spaces of women.

Much evil and abuse has already come from that, and it’ll only escalate if it’s allowed to continue.

The right needs to ignore the racist, sexist, nazi or misogynist taunts and allegations thrown at them by the left, as they will continue to use them until the right, overall, starts to get a spine and resists them.

I mean think of it. There is, for the most part, silence from Republican leaders in regard to the bill that passed the House. What will it take, wives and daughters being exposed to men wearing dresses in private areas, which results in rape in murder, before anyone starts to resist this and other abominations the Democratic, and increasingly, the Republican Party, endorse?

We must learn to disallow our enemies from piggybacking their agenda upon terminology that attempts to silence us into submission. That means we must stand up for the truth, resist the lies, and let the verbal assaults upon us land as they may.

It no longer matters, they’ve revealed their hand and end-play. They want to destroy Christian, Western civilization. We have to decide whether or not it’s worth fighting for.

Think of Canada and California as what America and other nations could be immersed with if we don’t engage in battle with the sole purpose of winning and completely defeating our enemies.