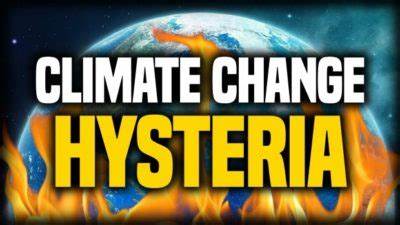 Below is a good example of media malfeasance, as the article waits until the last paragraph to reveal it’s nothing more than a socialist, redistribution of funds that is being talked about concerning the alleged risk of climate change, formally known as ‘global warming.’

Notice the subtitle over the last few paragraphs of the article, as it appeals the idea of “equitable” redistribution to many areas of the world, rather than in local and regional areas of the countries people reside in. It reinforces the fact that climate change is an over-hyped delusion being used by socialists to extract capital from the productive and redistribute it to unproductive people and corrupt governments. Also note the manipulative use of the word “experts.”

It will be important to invest funds equitably, experts say

World leaders and those in the finance and philanthropy industries need to ensure the funds are distributed as equitably as possible, Pryce said.

As climate change is addressed, it is imperative that no one is left behind, “whether that’s people in our own country…or developing and emerging markets around the globe,” she said.

G20 countries will also have to consider practices such as blended finance and social safety nets when it comes to rebuilding efforts for the escalated natural disasters that are already impacting developing regions, McLeod said.

“Bangladesh, Sierra Leone, lots of parts of Latin America, when communities are obliterated by storms, floods, heatwaves, who pays for that?” McLeod asked. “And society pays for that.”

However, more and more, solutions will need to be localized, McLeod said. Not every solution will work for every community, and it’s not enough to wait on the federal government to pass sweeping legislations, she added.

One of the tools corrupt media outlets use is to place the real issue at hand near the end of the article because it’s known that most people won’t read that far down in a longer article.

In the article mentioned, if you were to read the early part of the article most people would take something very different from the narrative than those that read to the end.